The Horoscopic Revelation And Details Of Aditi Singh Done By Expert

Aditi Singh was born on 15 November 1987 in Lucknow of Indian State of Uttar Pradesh.  She has a political association with the Indian National Congress and has contested for the party from the constituency of Rae Bareli situated as an MLA, in Uttar Pradesh. She is the wife of Angad Singh Saini, who is also an MLA in Punjab Legislative Assembly from the Nawanshahr constituency. She is said to be a rebel MLA for Congress Party, in light of her denunciation on her party’s stand over a number of buses for migrant laborers returning to Uttar Pradesh.

We are Horoscope Analysis About Aditi Singh, Indian politician from the viewpoint of astrology. The horoscope chart and representational narrative denotes the same.

Birth Details of Aditi Singh are as per given below: 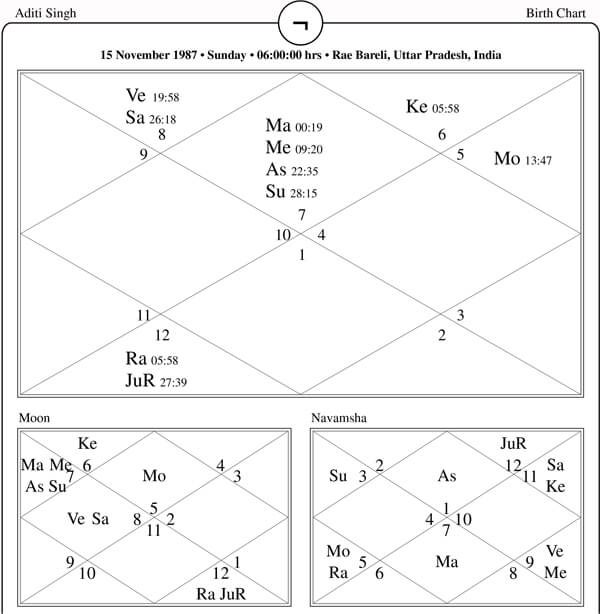 Since confirm Birth time of Aditi Singh is not available, we cast ‘Surya Kundli’ to view her prospects in near future.

Aditi Singh, Indian Politician is born with debilitated Sun in a cardinal air sign Libra, which is ruled by dear Venus.

Libra the seventh and the only Sun Sign to have a non living symbol —Scales. Going by its symbol, it’s easy to surmise that people born with the Sun Sign Libra are excellent at maintaining equilibrium and balance. The well known peace-maker of the Zodiac is a diplomatic, refined and generally, is a harmonious Sign. Cultured people with quite an attractive demeanor, they are quite popular in groups, though – at least initially. However indecisiveness is a Libra’s fatal flaw and that is why it’s important for them to team with strong, worldly –wise partners/spouses. The Scales are jovial, and nearly hypnotise people with their charming ways. They are a whiff of fresh air – cool, calm and pleasant, when around. They seldom have a strong dislike for something.

In ‘Surya Kundli’ debilitated Sun is associated with Mercury and Mars. This position leads Aditi Singh to become an intelligent and a strong personality. Aditi Singh expresses her views boldly. This kind of attitude can lend her in a soup. Aditi Singh, Indian Politician needs to make moves according to prevailing ground reality. Ruler of “Surya Kundli’ Venus is in a fix nature water sign Scorpio and along with Saturn gets placed in the second house. Venus and Mars exchange signs. Saturn and Venus make Aditi Singh wiser at handling big money. Jupiter is in own sign Pisces and along with Rahu is stationed in the sixth house. This indicates that Aditi Singh is able to soar over adversity and keep on moving on road to progress. Moon rules the tenth house. Moon is in a fix nature fire sign Leo and gets positioned in the eleventh house. Moon here presents opportunity to get benefitted monetarily. Malefic Ketu is in a dual nature earth sign Virgo and stationed in the 12th house. This position of malefic Ketu leads Aditi Singh to become spiritually inclined.

In Navmansha D9 chart, Jupiter and Saturn being in own sign gathers strength. Mars and Moon gather strength on being ‘Vargottami’.

On viewing position of planets in Libra Zodiac Sign ‘Surya Kundli’ and deliberating on effect of transit by major planets, we try to view prospects of Aditi Singh in near future.

Hard task master Saturn currently transits in own sign Capricorn in retrograde mode. Saturn moves through the fourth house in retrograde mode. Saturn moving through the fourth house, aspects Natal debilitated Sun, Mercury and Mars in “Surya Kundli”. Saturn moving through the fourth house has an eye over Natal Jupiter and Rahu positioned in the sixth house. However, with Saturn moving in retrograde mode things move slowly. From around last week of September 2020, Saturn becomes direct in motion. In due course of time, Saturn comes closer degreecally to natal position of planets it influences. Viewing this ensuing period seems eventful for Aditi Singh in near future. Aditi Singh, Indian Politician gets opportunity to express her views firmly. Period in near future seems encouragingly progressive for Aditi Singh.

Benevolent Jupiter currently transits in own sign Sagittarius in retrograde mode. Retrograde Jupiter moves through the third house in ‘Surya Kundli’. Influence of Jupiter may not be much effective due to moving in retrograde mode. From mid of September 2020, Jupiter becomes direct in motion. Jupiter moving through the third house has aspect over natal Moon stationed in the eleventh house. Besides Jupiter has aspect over the seventh and the ninth house. This can lead to developing meaningful association for Aditi Singh, Indian Politician. The associations are to last long for Aditi Singh. Influence of Jupiter over the ninth house protects interests of Aditi Singh.

Two major planets transiting in own sign and moving through strategic important house surely leads to much eventful and encouragingly progressive time in near future for Aditi Singh, Indian Politician.

On viewing planetary positions in Libra solar chart and deliberating on effect of transits by major planets we view that Aditi Singh comes in lime light and expresses her views firmly. Period in near future seems eventful and encouragingly progressive for Aditi Singh, Indian Politician. If you want to know your career future then get our Career Horoscope report.

Don’t forget to read: About Nirmala Sitharaman Horoscope and About Urmila Matondkar Horoscope 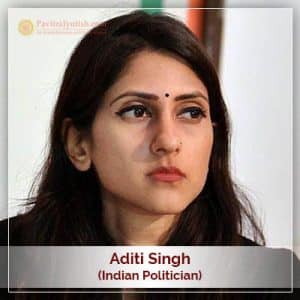 The Horoscopic Revelation And Details Of Aditi Singh Done By Expert Aditi Singh – Indian Politician Aditi Singh was born on 15 November 1987 in Lucknow of Indian State of Uttar Pradesh.  She has a political association with the Indian National Congress and has contested for the party from the constituency of Rae Bareli situated … END_OF_DOCUMENT_TOKEN_TO_BE_REPLACED 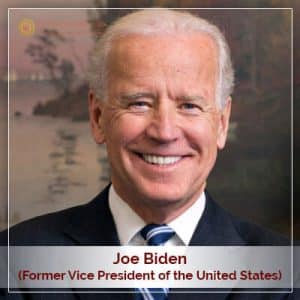 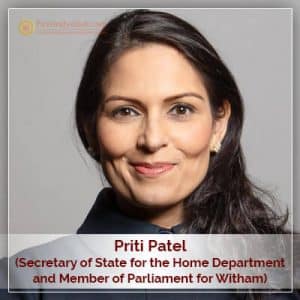 Priti Patel And Her Varying Aspects As Astrologically Observed Priti Patel – Secretary of State for the Home Department and Member of Parliament for Witham Priti Sushil Patel was born on 29 March 1972 in London, to her parents, Sushil and Anjana. Educated in economics at Keele University, and British government and Politics at the … END_OF_DOCUMENT_TOKEN_TO_BE_REPLACED 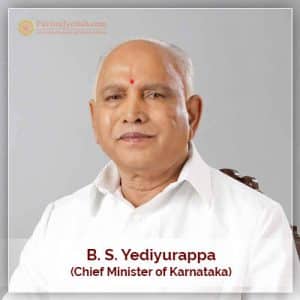 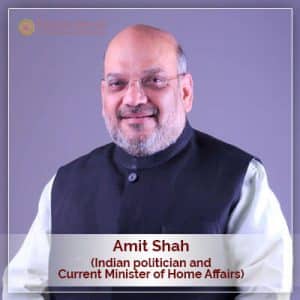 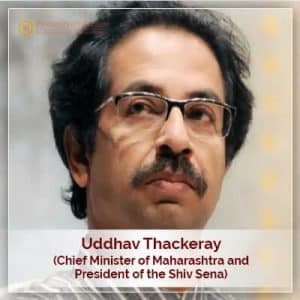 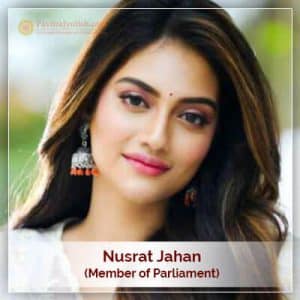 What Does Vedic Astrology Talk About Tejasvi Surya? Read This Introduction of Tejasvi Surya – Indian Politician Tejasvi Surya or L. Suryanarayana Tejasvi is a noted politician in India. He was born on November 16, 1990 in the Chikkamagaluru district of Karnataka. While in the pursuit of education during his childhood, Tejasvi is said to … END_OF_DOCUMENT_TOKEN_TO_BE_REPLACED 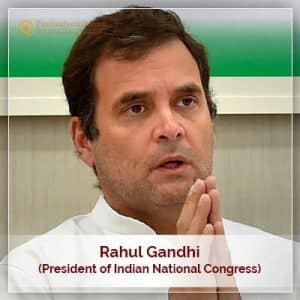 Comprehensive Astrological Analysis On Rahul Gandhi Introduction of Rahul Gandhi Rahul Gandhi, President of Indian National Congress is a noted politician in India known for being a descendant of Nehru-Gandhi family whose political influence and dominance all over Indian politics was pervasive since the time the country got freedom in the year 1947. Family and … END_OF_DOCUMENT_TOKEN_TO_BE_REPLACED 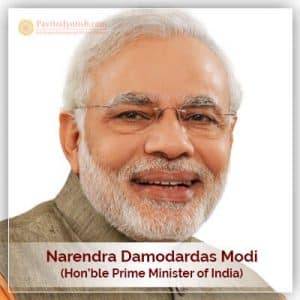 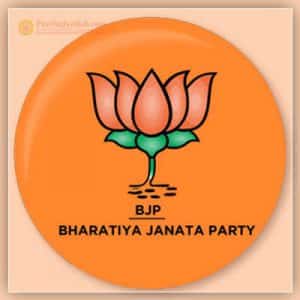 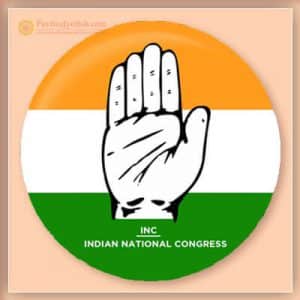 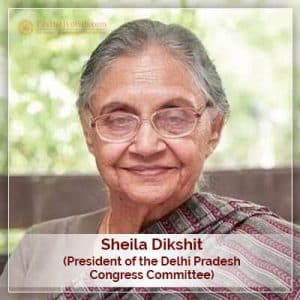 Astrological Analysis On Former CM Of Delhi, Sheila Dikshit Introduction of Sheila Dikshit President of the Delhi Pradesh Congress Committee and Former Chief Minister of the Delhi Sheila Dikshit (or Dixit due to the English version of her surname) is one of the most distinguished, widely popular and ever so veteran leaders, who has been … END_OF_DOCUMENT_TOKEN_TO_BE_REPLACED 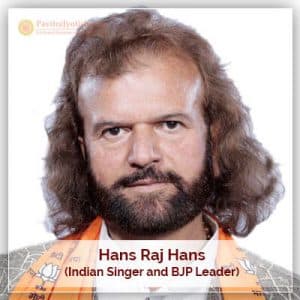 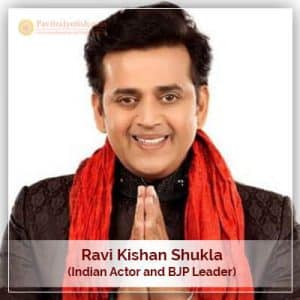 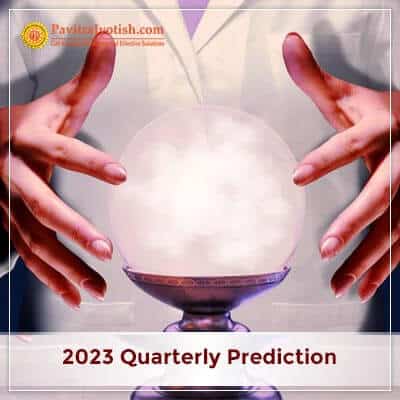