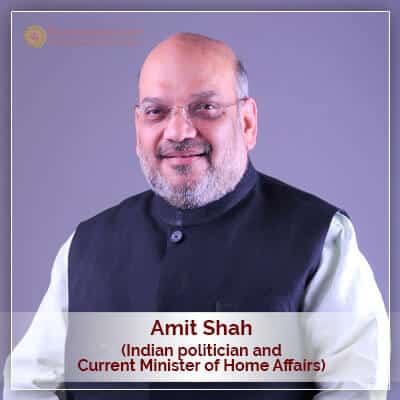 Learn About Amit Shah And How He Stands In Astrological Analysis

One of the most eminent politicians in India, Amit Anilchandra Shah, Indian Politician and Minister of Home Affairs was born on 22 October 1964 in a Gujarati Hindu family.  The preliminary education of Shah happened at Mehsana. Later, he pursued his academic career at CU Shah Science College wherein he studied biochemistry. After completing his B.Sc. degree in biochemistry, Shah involved himself in a business run by his father. Besides, his professional involvement was also as a stockbroker and in Ahmedabad-based co-operative banks. Shah has unbreakable alliance with the Rashtriya Swayamsevak Sangh since his childhood and volunteered for its cause during his college days in Ahmedabad. His meeting with Narendra Modi (now Prime Minister of India) happened through RSS circles in Ahmedabad, when the latter was working as an RSS pracharak (propagator). Currently, Mr. Shah graces the portfolio of Home Ministry as the Minister of Home Affairs. He successfully served his tenure as the President of BJP from the period of 2014 to 2020. He contested 2019 Indian general election from Gandhinagar and was elected to the lower House of Parliament the Lok Sabha. Before that, he was elected as a member of the upper House of Parliament the Rajya Sabha from Gujarat in 2017. He is the most influential political figure, after Narendra Modi, in India. In BJP, his acumen in policy-making strategy is accredited as peerless. He is a close aide to the current Indian Prime Minister, Narendra Modi.

We are making an astrological analysis on the life of one of the most eminent political figures in India, Amit Shah, also the current Home Minister of India. Narratives denoting the same are being represented in the following horoscope chart.

Birth Details of Amit Shah are as per given below: The sixth Sign of the Zodiac – Virgo is represented by a Virgin. Virgo is the only Sign symbolized by a female, in the entire Zodiac calendar. To begin with, most of the Virgo natives tend to be calm, shy and quiet, at least on surface. They often take time to react to a situation. Being down-to-earth and easy-going, they also tend to be calculated and diplomatic, in demanding situations, more so because of their steadying element –Earth. How do not dare to displease, hurt them any time. They do not forget and bid for time to take revenge. They prefer to pick and select their friends.

Ruler of the Ascendant Mercury is in air sign Libra along with debilitated Sun and positioned in the second house. This conjunction of Sun and Mercury support “Budhaditya yoga”. This leads to having sharp intelligence and have encouraging financial gain through their own efforts. Venus rules the second house, linked with finance and family. Venus is in a fire sign and stationed in the 12th house. Venus and Sun exchange sign with each other and gather strength. Moon is in first of fire sign Aries and positioned in the eighth house. Mars rules the eighth house, is in a water sign Cancer and positioned in the eleventh house, linked with gain and relationship. In this way, Moon and Mars exchange signs. Jupiter rules the fourth and the seventh house. Jupiter is retrograde in fix nature first of air sign Taurus and stationed in the ninth house, linked with luck in general. This indicates that Amit Shah, Indian politician gets encouraging opportunity to climb up the ladder in his endeavor. Shadow planet Rahu is in a dual nature air sign Gemini. Rahu is positioned in the tenth house. Rahu is in its friendly sign. This position makes Amit Shah to exert more to make desirable level of progress. Malefic Ketu is in last of fire sign Sagittarius and stationed in the fourth house. Amit Shah, Minister of Home Affairs gets more encouraging opportunity away from home. Wily Saturn rules the sixth house and also holds portfolio of the fifth house. Saturn is retrograde in own sign Aquarius and stationed in the sixth house. In viewing this, Amit Shah, Indian politician knows well how to score over opposition and able to assert his views. Get best guidance and solution for your  life problems by our Best Astrologer In Delhi.

In D10 chart, ruler of the tenth house mighty Sun is in the first house. This position supports Amit Shah, Indian politician to succeed in climbing up the ladder and become an astute politician.

After viewing planetary positions in Virgo Ascendant and transit by Major planets, we try to explore prospects of Amit Shah, Indian politician in near future.

Hard task master currently transits in own sign Capricorn. Saturn moves through the fifth house. Saturn moves through the fifth house, in opposition to radical position of debilitated Mars stationed in the eleventh house. Saturn moving through the fifth house aspects radical position of debilitated Sun and Mercury positioned in the second house. This movement and influences of Saturn indicates kind of challenging time for Amit Shah, Minister of Home Affairs. Amit Shah, Member of the Lok Sabha has to shoulder more responsibility and act in new role as home minister, in central government. Some of measures taken by Amit Shah, Member of the Lok Sabha can lead to controversy. Amit Shah, Indian politician is to speak out his stand loudly. This movement of Saturn is to test his ability as a mature politician. This period seems much eventful and challenging to some extent. However, during this period is able to establish his authority as able Home Minister.

Shadow planet Rahu currently transits in a dual nature air sign Gemini and moves through the tenth house, linked with ‘Karma’. Rahu repeats own radical position, it is Rahu return. This movement of Rahu keeps Amit Shah, Member of the Lok Sabha busier politically and in performing his duty as a responsible Home Minister. Amit Shah, Minister of Home Affairs has to take initiative to shoulder more responsibility. Some change for good seems to be in offing for Amit Shah, Indian politician during this movement of Rahu through the tenth house.

Jupiter currently transits in own sign Sagittarius and along with malefic Ketu moves through the fourth house. This is Ketu return. Jupiter moving through the fourth house aspects radical position of Moon stationed in the eighth house and also eyes radical position of Venus positioned in the 12th house. This movement and its positive vibes of Jupiter, pushes progressive forces to work much effectively. This leads to much eventful time for Amit Shah, Minister of Home Affairs. However, things may not move fast as desired by Amit Shah, Member of the Lok Sabha initially.

From end of March 2020, Jupiter enters its sign of debilitation earth sign Capricorn. Jupiter moves through the fifth house in company of Saturn already moving therein. Both move in opposition to radical position of debilitated Mars stationed in the eleventh house. Jupiter moving through the fifth house aspects own radical position in the ninth house and the Ascendant. Viewing these influences of Jupiter, things are likely to move favorably for Amit Shah, Member of the Lok Sabha on political front. The movement of two major planets through the fifth house is surely indicative about something big in offing for Amit Shah in near future.

Viewing two major planets transiting in own sign, through important houses, surely indicates period is to be much eventful, Amit Shah, Indian politician remains busier handling important matters related to government and his party. Amid some challenges, Amit Shah, Indian politician is able to ahead on road to progress and prosperity. Amit Shah, Minister of Home Affairs is able to prove his worth as an able, versatile politician and Home Minister in near future. Read similar Politics Articles from our website PavitraJyotish.