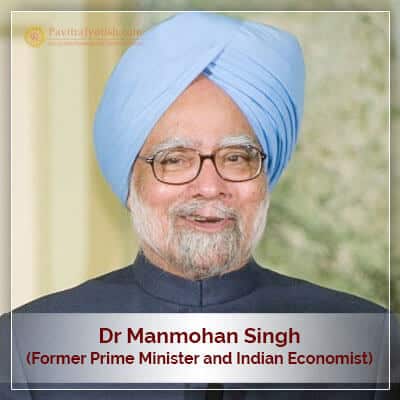 Dr. Manmohan Singh, Former Prime Minister, erudite economist, politician, and former Indian Finance Minister, is a reputable figure in Indian landscape and India’s one and only Sikh who had graced the portfolio as the Prime Minister of India for the tenure of 2004 to 2014.  Since Jawahar Lal Nehru, the first prime minister of India, Manmohan Singh is the first Sikh politician who was reelected for the PM portfolio subsequent to completing a full 5-years term as Prime Minister of India. Singh was born on 26 September 1932, in Jhelum Pakistan into a Sikh family of Gurmukh Singh and Amrit Kaur. After the death of his mother during a very young age of Singh, his paternal grandmother, with whom Manmohan Singh was very close, had raised him. His family shifted to India’s Amritsar in the aftermath of India’s partition that took place in the year 1947. He received his bachelor’s and master’s degrees in 1952 and 1954 respectively and received the degree of Economics Tripos at the University of Cambridge in 1957. Recalling his Cambridge days Singh said in an interview that he grew conscious of the creative role in human affairs because of pragmatic, scintillating, stimulating teaching of particularly two distinctive teachers; Joan Robinson and Nicholas Kaldor to whom Singh said to owe a great deal of gratitude.

Later Singh went to the University of Oxford to study Doctor of Philosophy (D.Phil.) and was a member of Nuffield College in 1960. He worked for the United Nations Conference on Trade and Development from 1966 to 1969 after he had done his DPhil from the University of Oxford.  His talent as an economist did not go unnoticed and discerned by former Indian railway minister Lalit Narayan Mishra who appointed Singh as an advisor to the Ministry of Foreign Trade. He was also Professor of International Trade at the Delhi School of Economics, University of Delhi for the tenure of 1969 to 1971. He held the position as Chief Economic Adviser in the Ministry of Finance in 1972 and later in 1976 he worked as secretary in the Finance Ministry. He also held the position as Governor of Reserve Bank of India in 1982 during the time when Pranab Mukherjee was the Finance Minister of India. During the tenure of India’s former Prime Minister Vishwanath Pratap Singh, Manmohan Singh served as an Advisor to Prime Minister of India on Economic Affairs. Singh forayed into Indian politics when he was offered the portfolio of Finance Ministry by the then Prime Minister P. V. Narasimha Rao in 1991, the year that was witnessing economic crisis in India with nation’s fiscal deficit close to 8.5 per cent of the gross domestic product due to reasons mostly centralizing around License Raj that Singh abolished as one of the reformative measures to improve India’s dwindling economic condition. Later Singh was hailed as the Deng Xiaoping of India by P. Chidambaram. The then chairperson of UPA Sonia Gandhi, after victory of Congress Party in 2004 general elections, appointed Singh as the UPA candidate for the Prime Ministership because of Singh’s untainted image and massive popularity as an economist. Singh was sworn in as PM on 22 May 2004. Dr. Manmohan Singh is also the recipient of several honorary accolades, including Doctor of Letters in 1983, Honorary Doctor of Law degree in 1997 by the University of Alberta, Doctor of Civil Law in 2005 by the University of Oxford and by the University of Cambridge in 2006. The honorary doctorate degree was awarded to him by King Saud University in 2010.

We at PavitraJyotish are conducting an astrological analysis on the life of former prime minister and an esteemed economist, Dr. Manmohan Singh.

Birth Details of Manmohan Singh are as per given below: 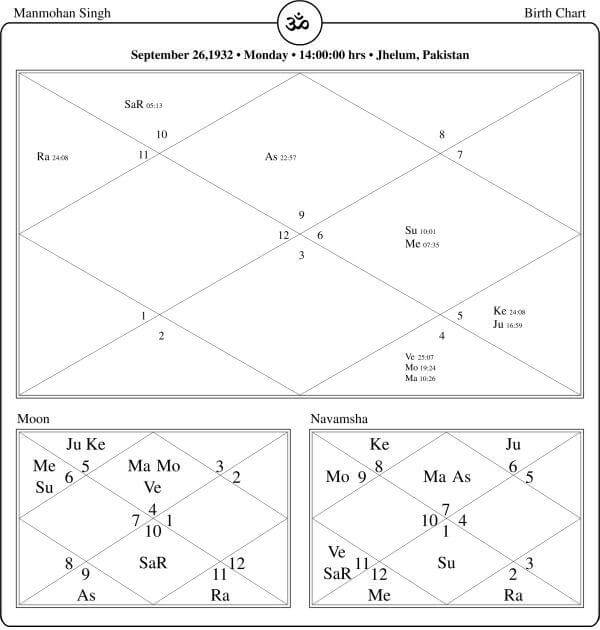 Adventurous yet philosophical, – Sagittarius better known as – Archer, is a typical fire sign – full of beans, volatile to the tee, exaggerated in speech and expression and absolutely in love with freedom. Most Sagittarius natives are focused and goal oriented, though. They aim to get the best in life, and do not prefer missing the bull’s eye. Mighty Sun and crafty Mercury are positioned in the tenth house. This position supports best of ‘Raj yoga’. This led him to have high position with RBI. Later on become finance minister in central cabinet. From 2004 he became Prime Minister of India. He enjoyed all these positions due to the ‘Raj Yoga’.

Ruler of the Ascendant Jupiter is in a fire sign Leo along with malefic Ketu. Both are positioned in the ninth house. The ninth house is linked with luck in general and long distance travel. Dr. Manmohan Singh, Indian Economist and Former Prime Minister has traveled to foreign countries often. Ruler of the ninth house mighty Sun is in a dual nature earth sign Virgo along with ruler thereof crafty Mercury. Both are stationed in the tenth house. This house is linked with occupation alias Karma. This position works well for Dr. Manmohan Singh, Former Prime Minister to climb up the ladder. Hard taskmaster Saturn is retrograde in its own sign Capricorn. Saturn is positioned in the second house. This house is linked with finance and family mainly. This position supports him for becoming a learned economist. Moon rules the eighth house. Moon is in its own sign Cancer along with Venus and debilitated Mars. All are stationed in the eighth house. This is in opposition to retrograde Saturn positioned in the second house. This position leads Dr. Manmohan Singh, Former Prime Minister to formulate sound strategy to achieve his objective. Shadow planet Rahu is in last of air sign Aquarius and positioned in the third house.

In Navmansha D9 chart, Saturn is own sign Aquarius and gathers strength. Mercury is debilitated hence loss of strength.

Effect of Transits by Major Planets during the year 2019

Hard task master Saturn Transit in a dual nature last of fire sign Sagittarius for whole of the year 2019. Saturn moves through the first house. Saturn moving through the first house has an eye over the tenth house along with Sun and Mercury stationed therein. This indicates a major change for Dr. Manmohan Singh, Former Prime Minister on political front. He can go to stand as candidate of congress party in upcoming general elections. He has never fought in general elections throughout his life. Manmohan Singh, Indian Economist and Former Prime Minister has to accept new challenges willingly to win the general elections. Progressive forces are to start working effectively for him. This movement of Saturn is to be much eventful. He needs to keep his cool and have patience on his side. This period is to prove much challenging for Manmohan Singh, Indian Economist.

Shadow planet Rahu currently transits in a dual nature air sign Gemini. Rahu moves through the seventh house. This can lead Dr. Manmohan Singh, Former Prime Minister to get more support from unfamiliar quarters. Progressive forces are to work much effectively for Manmohan Singh, Indian Economist. He is then able to prove his worth in national politics. If he can win in elections then this is to be great achievement by him.

Malefic Ketu currently moves in last of fire sign Sagittarius. Ketu moves through the first house in company of wily Saturn. This movement of two malefic is to present new challenges for Manmohan Singh, Indian Economist and Former Prime Minister. He needs to accept new challenges willingly and work hard over the same. Now progressive forces are to work more effectively here. He has to exert more and develop more contacts to succeed in achieving his objective.

Benevolent Jupiter currently transits in a fix nature water sign Scorpio. Jupiter moves through the 12th house now. Jupiter moving through the 12th house has an eye on the eighth house along with Moon, debilitated Mars and Venus stationed therein. The positive vibes from Jupiter seems supportive for making notable progress on national politics. He is able to prove his worth as a versatile economist and mature politician. He also becomes aware about his responsibility.

From 30th March Jupiter enters its own sign Sagittarius. Soon from 11th April Jupiter turns retrograde. From 23rd April Jupiter again enters water sign Scorpio moving in retrograde mode. From 12th August Jupiter becomes direct in motion. This period of retrogression by Jupiter seems much eventful and much challenging for Dr. Manmohan Singh, Former Prime Minister. He has to stay focused at task on hand and accept new challenges willingly. He needs to work hard on new challenges to move ahead on road to progress. Things are to move favorably for Manmohan Singh, Indian Economist from around mid of August. He is then able to succeed in making desired level of progress as an economist and also on political front.

From 5th November Jupiter reenters its own sign Sagittarius. Now Jupiter moves through the first house in company of Saturn and malefic Ketu. This movement of Jupiter is to work well to reduce intensity of evil negative effect rendered by two malefic. Manmohan Singh, Indian Economist and Former Prime Minister is to have more freedom to work and implement his constructive ideas. His prospects in general are to enhance now. Progressive and prosperous time is envisaged for Dr. Manmohan Singh, Former Prime Minister. He is to have fewer constraints on road to progress.

Summarizing the effect of transit by major planets during the year 2019, a major change is envisaged for Dr. Manmohan Singh, Indian Economist. He has to accept new challenges willingly and work hard over the same prove his worth in national politics. 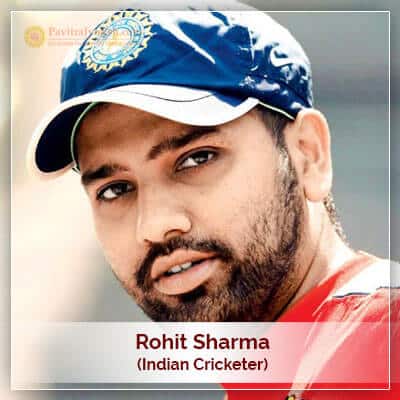