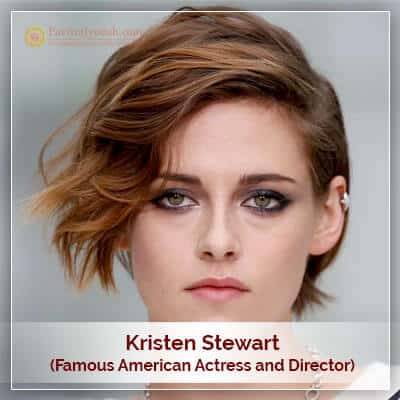 The Astrological Side Of Kristen Stewart You May Have Not Known

Famous American Actress and Film Director, Kristen Jaymes Stewart was born on April 9, 1990 to the family of John Stewart (father) and Jules Mann-Stewart (mother). Her initial school periods were until the seventh grade because of her involvement in acting, though she anyhow did high school through distance education. To act in films was not her initial idea as she was more preoccupied with the notion of being a director. She appeared in some films but success came through the film Panic Room (2002) which caused her nomination for a Young Artist Award for her great cinematic performance. The year from 2004 to 2007 was her best acting career periods because most of her movies did great commercial performance at box office, including television film Speak (2004), In the Land of Women (2007), Into the Wild (2007), and The Cake Eaters (2007). Kristen has received several accolades for her convincing and outstanding cinematic performances; some of the praiseworthy notions of them include a César Award. For the year 2010 and 2012, she held her position as world’s highest-paid actress revealing the fact that her movies did impressive commercial revenue generation of over $4.3 billion worldwide.

Kristen received critical fame for her brilliant performance in the film, Clouds of Sils Maria that won her the César Award for Best Supporting Actress. Kristen basked in big global spotlights for her movie, Twilight, which was based on the vampire romance novel of the same name authored by Stephenie Meyer. Her lead role in the movie was the characterIsabella “Bella” Swan alongside the co-star Robert Pattinson who played her vampire boyfriend as Edward Cullen. The Twilight Saga became world’s some of the most commercially superhit films, and Kristen was nominated for four times the Young Artist Award. This is where her love for Pattinson grew and both started dating each other until certain controversy that resulted in break-off of their courtship. Then she dated New Zealand model Stella Maxwell. Later, in an interview with The Guardian, Kristen had confessed to being a bisexual. She is a brand ambassador for the fashion brands, Chanel, and Balenciaga. She was also ranked number third as world’s sexiest woman by a men’s lifestyle magazine, FHM.

Do you have something to Ask Astrologer? Personal Ask 1 Question can help you find best and relevant astro-solution for your current plight.

Birth Details of Kristen Stewart are as per given below: 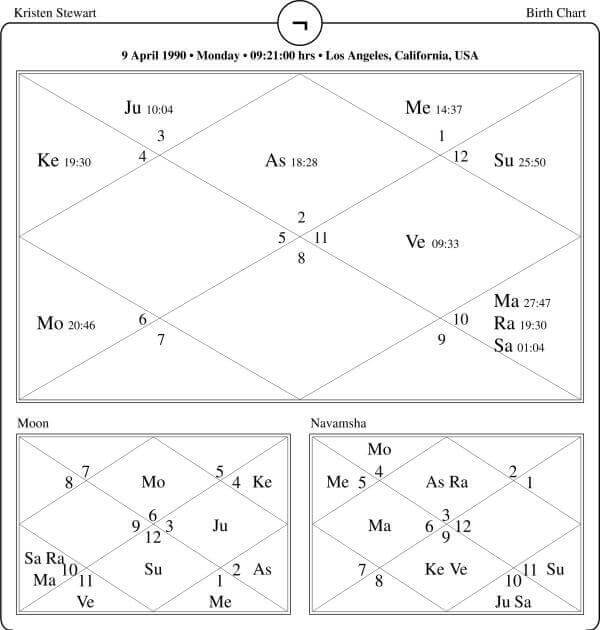 Kristen Stewart, American Actress and Director is born with Taurus Ascendant. Taurus is a fix nature first of earth sign and ruled by Venus. Besides being ruler of the Ascendant, Venus also holds the portfolio of the sixth house. Venus is in a fix nature last of air sign Aquarius and positioned in the tenth house. Mighty Sun rules the fourth house. Sun is in dual nature last of water sign Pisces and stationed in the eleventh house, linked with gain mainly. This position seems to support Kristen Stewart to have handsome financial gain. Moon is in a dual nature earth sign Virgo. Moon is positioned in the fifth house, in opposition to mighty Sun stationed in the eleventh house. Benevolent Jupiter is in a dual nature first of air sign Gemini and positioned in the second house, linked with finance and family. This position of Jupiter can lead to financial loss some time. Kristen Stewart, American Actress needs to remain attentive about receivables. Saturn is measured as most beneficial alias ‘Yoga Karka’. Saturn is in own sign Capricorn along with shadow planet Rahu and exalted Mars. All are stationed in the ninth house, linked with luck in general and long distance travel mainly. Kristen Stewart, Director travels lot for performing as an actress. Malefic Ketu is in a water sign Cancer and positioned in the third house. Mercury rules the second house and also holds portfolio of the fifth house. Mercury is in first of fire sign Aries and stationed in the 12th house.

In Navmansha D9 chart, Moon and Saturn are in their own sign and gather strength. Jupiter is debilitated and leads to loss of strength.

Wily Saturn currently transits in a dual nature last of fire sign Sagittarius along with malefic Ketu. Both move through the eighth house. Saturn moves through the eighth house in opposition to radical position of Jupiter stationed in the second house and also has an eye on Moon stationed in the fifth house. This movement and its influence over radical position of Moon do not spell well for Kristen Stewart in matter related to her social life. Kristen Stewart, American Actress needs to avoid conflict and any kind of controversy. She needs to remain focused at task on hand to make due progress in her occupation as a talented actress. Kristen Stewart, Director needs to remain careful about health, during this movement of Saturn through the eighth house.

Jupiter currently transits in a fix nature water sign Scorpio. Jupiter moves through the seventh house. Soon from 5th November 2019, Jupiter enters own sign Sagittarius. Jupiter moves through the eighth house in company of wily Saturn and malefic Ketu. Jupiter now moves in opposition to own radical position stationed in the second house. Jupiter moving through the eighth house eyes radical position of Mercury stationed in the 12th house. This influence of Jupiter over radical position of Mercury spells well for Kristen Stewart, Director on financial front. She can get her receivable which is stuck up for long. Kristen Stewart is likely to get good opportunity to benefit handsomely on financial front.

From around end of March 2020, Jupiter enters its sign of debilitation earth sign Capricorn. Jupiter moves through the ninth house in company of Saturn already moving therein. This movement of two major planets through the ninth house, cross over radical position of Rahu, exalted Mars and also radical position of Saturn itself. This movement of two major planets indicates something big in offing for Kristen Stewart, American Actress. However, ground reality may not change much initially. From around mid of May Jupiter becomes retrograde in Capricorn. From around end of June 2020, Jupiter moving in retrograde mode again enters own sign Sagittarius. Jupiter becomes direct in motion from around mid of September 2020. From around end of last week of November, Jupiter moving direct in motion gives Kristen Stewart, Director to regain lost opportunity if any now. She is able to make due progress in her pursuit. This movement of Jupiter indicates progressive and prosperous time for Kristen Stewart.

From around last week of January 2020, Saturn enters own sign Capricorn. This is now Saturn return. Saturn moves through the ninth house repeats own radical position and crosses over radical position of exalted Mars and shadow planet Rahu. This movement of Saturn in the ninth house leads progressive forces to work effectively. Kristen Stewart, American Actress while moving on road to progress is to come across new challenges. She needs to accept new challenges and keep exerting over the same to make desirable level of progress and receive applauds for her inherent ability and talent to be able to perform different kind of role in film in a lead role. This transit of Saturn in own sign through ninth house, indicates much progressive and prosperous time for Kristen Stewart, Director.

Overall, effect of transit by major planets seems indicative about much progressive and prosperous time ahead for Kristen Stewart, Director. However, she has to accept new challenges and keep working over the same to achieve desirable level of progress. At the same time, Kristen Stewart, American Actress needs to remain careful about health.

Must Read: About Emma Watson Horoscope and About Jennifer Lawrence Horoscope 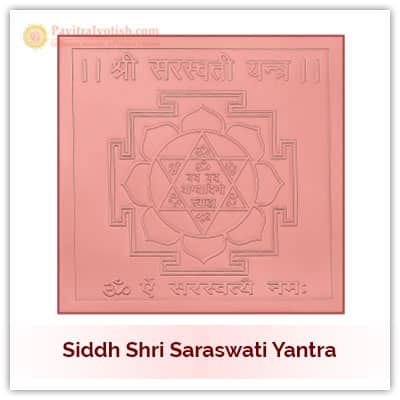 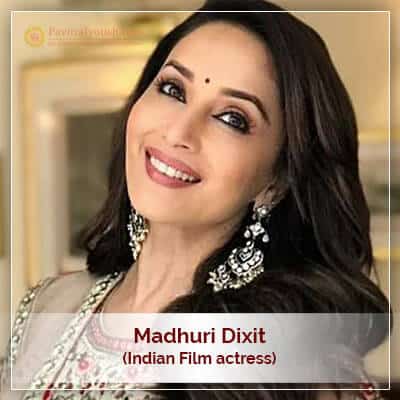