Sadhguru Jaggi Vasudev is an Indian spiritual guru (Indian yogi) who has also founded a non-profit organization called Isha Foundation. Also an author and yogi, Sadhguru Jaggi Vasudev lends noble contribution in the field of education, environments and social welfare. His organization is world’s one of the most popular platforms that organizes yoga programs apart from being engaged in extending social outreach and initiatives related to ecological safety. He has authored books on different genres, including health, religion, spirituality and faith, as well as books about Advice and others which feature exclusively on The New York Times Best Seller list. Sadhguru is also the recipient of India’s honorable civilian award, Padma Vibhushan, conferred to him by Indian Government in the year 2017 for his contribution toward spiritualism.

PavitraJyotish conducts an astrological analysis on characteristic aspects of Sadhguru through the horoscope chart as narrated below.

Birth Details of Sadhguru Jaggi Vasudev are as per given below: 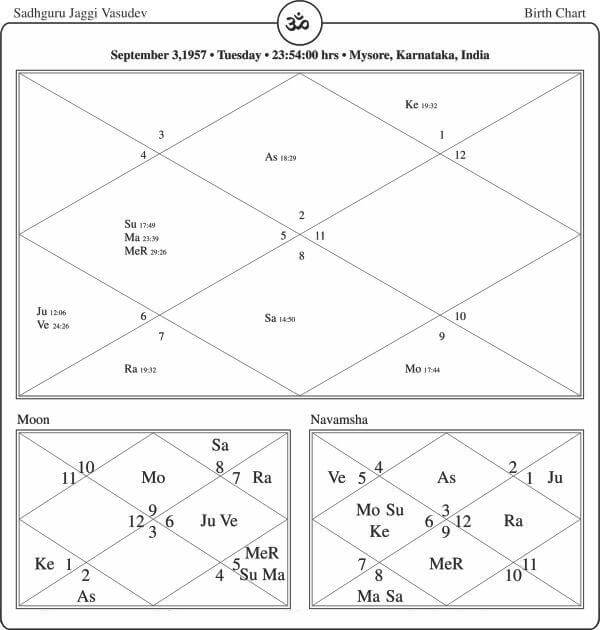 Sadhguru Jaggi Vasudev, Indian Yogi is born with Taurus Ascendant. Taurus is a fix nature earth sign, ruled by Venus. Venus is debilitated in a dual nature earth sign Virgo and positioned in the fifth house along with Jupiter. Ruler of the fifth house Mercury is retrograde in a fire sign Leo. Mighty Sun and Mars are in company with retrograde in Leo and stationed in the fourth house. Sun is ruler of fire sign Leo. This position induces Sadhguru Jaggi to become a strong personality and eager to acquire knowledge about Yoga and spirituality. Moon being ruler of the third house is in a dual nature last of fire sign Sagittarius and placed in the eighth house. This makes him optimistic and have in depth knowledge in Yoga and spirituality. Malefic shadow planet Rahu is in air sign Libra. and positioned in the sixth house. Ketu is in first of fire sign Aries gets placed in the 12th house. Saturn is measured as most beneficial alias ‘Yoga Karka’ planet for Taurus Ascendant. Saturn is in a fix nature water sign Scorpio and positioned in the seventh house. Mars placed in the fourth house aspects Saturn and in turn Saturn has an eye on the fourth house along with planets placed therein.

According to Bhav Chalit Mercury shifts into the fifth house and joins company of Venus and Jupiter.

In Navmansha D9 chart, Saturn on being in the same sign as in birth chart becomes stronger. Mars is in own sign Scorpio and gathers strength.

Effect of transit of Major planets in near future

Wily Saturn transits in a dual nature, last of fire sign Sagittarius during 2018 and whole of the year 2019. Saturn now moves through the eighth house in his chart. During transit Saturn crosses over radical position of Moon stationed in the eighth house. Now Sadhguru Jaggi, Spiritual Guru is under the influence of “Sade-Sati’. This can lead to stressful time for him. He is to more connect with yoga and spirituality. He has to make further progress in Yoga and spirituality. Transiting Saturn has an eye over the fifth house along with Venus and Jupiter posited therein. This indicates a major effect for good on his status as Yogi. Isha foundation founded by him is to have wider impact on his charitable work. In turn Sadhguru Jaggi, Spiritual Guru is to have more followers and acceptance level stands to increase during this movement of Saturn in Sagittarius through the eighth house.

Malefic shadow planet Rahu (north node) currently transits in a water sign Cancer through the third house. This movement of Rahu induces him speak loudly about his likings and his plan for further progress. Short term travel is to bear encouraging results for Sadhguru Jaggi, Indian Yogi. Malefic Ketu currently transits in earth sign Capricorn and moves through the ninth house. This movement of Ketu does not sound a happy proposition for Sadhguru Jaggi. He is to have a kind of challenging time for him.

From around March 2019, Rahu enters a dual nature air sign Gemini and traverses through the second house in his chart. Issue in family can put him in discomfort. He needs to handle this much tactfully and with due delicacy. This works well to preserve warmth and harmony. Now malefic Ketu enters last of fire sign Sagittarius. Ketu then moves through the eighth house in company of wily Saturn. This movement of two malefic can lead to some health issue for Sadhguru Jaggi. He needs to be much careful about his health. Giving more time for meditation is to help his cause.

Jupiter currently transits in a fix nature water sign Scorpio. Jupiter now moves through the seventh house. During this transit Jupiter crosses over radical position of Saturn stationed therein. This movement of Jupiter is to induce him to learn few things which are useful for his progress. This transit is to enhance acceptance level for Sadhguru Jaggi. He is to have some issue with one in confirmed relationship. He needs to keep his cool and have patience on his side. He needs to handle this much tactfully and with due delicacy. This leads to have kind of challenging time for Sadhguru Jaggi in this regard.

From 30th March 2019, Jupiter enters its own sign Sagittarius. From 11th April Jupiter turns retrograde in Sagittarius. From 23rd April Jupiter reenters water sign Scorpio in retrograde mode. Jupiter becomes direct in motion from 12th August. This retrogression period of Jupiter is to prove challenging for Sadhguru Jaggi. He needs to refrain from taking any major decision on all fronts. Jupiter becoming direct in motion is to work well to ease out any pressure like situation.

Summarily, transit of major planets indicates mix results. This period seems eventful and progressive for Sadhguru Jaggi. He is to have challenging time in between for him as mentioned above. 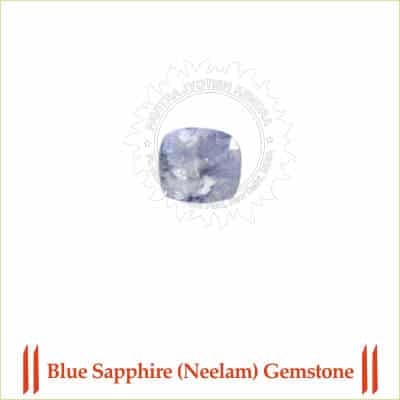