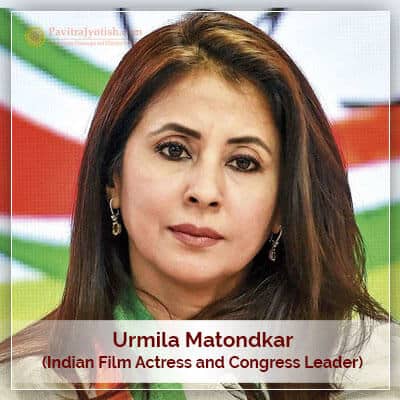 Here Is What Urmila Matondkar As Revealed Astrologically

One of the leading actresses in Hindi cinema known for versatile acting prowess, Urmila Matondkar was born on 4 February 1974 to a Marathi-speaking Hindu family of Shivinder Singh and Rukshana Sultana. The name of her elder sister is Mamta Matondkar and younger sister’s name is pooja Matondkar, and elder brother, Kedar Matondkar. Apart from cultivating her career in Hindi cinema as an actress, Urmila is also known for her other involvement as a television personality and now an Indian politician associated with Indian National Congress. Furthermore, she also appeared in films of different languages like Marathi, Telugu, Tamil, and Malayalam. The performance of Urmila Matondkar, Indian Film Actress and Congress Leader in most films, including Bhoot, Maine Gandhi KoNahi Mara, and Pyaar Tune KyaKiya won her awards of Best Actress, Screen Award, and Nandhi Award, as well as a Filmfare award. These prestigious accolades brilliantly endorsed the acting prowess of Urmila among filmmakers and helped her establish in the competitive Bollywood industry as a talented and dependable actress.

Urmila first appeared as a child artiste in a Marathi film Zaakol. Kalyug was her first Hindi film, but the film Masoom won her widespread recognition as a child artiste. Her cinematic career encountered a brief setback but soon she bounced back and appeared in a commercially successful film, Aa Gale Lag Ja and later with another blockbuster hit Rangeela in 1995. Directed by famed filmmaker, Ram Gopal Verma, the movie revolved around the life of a cheeky street guy, Munna portrayed by Aamir Khan. It was a major success at the box office and drew critical appreciation, besides being screened at the International Film Festival of India. The success of Rangeela proved a turning point for the career of Urmila. She also received praiseworthy recognition for her performance in the films likeJudaai, Satya, Jungle, Khoobsurat and other different films, including Kaun, Pinjar, Naina, and Bas Ek Pal, etc. She worked with many leading actors of Bollywood, including Shah Rukh Khan, Aamir Khan, Ajay Devgan, and Sanjay Dutt. Urmia is married to Mohsin Akhtar Mir.

We at PavitraJyotish are conducting an astrological analysis on the life of Urmila Matondkar, Congress Leader in the following horoscope chart and details that follow.

Birth Details of Urmila Matondkar are as per given below: 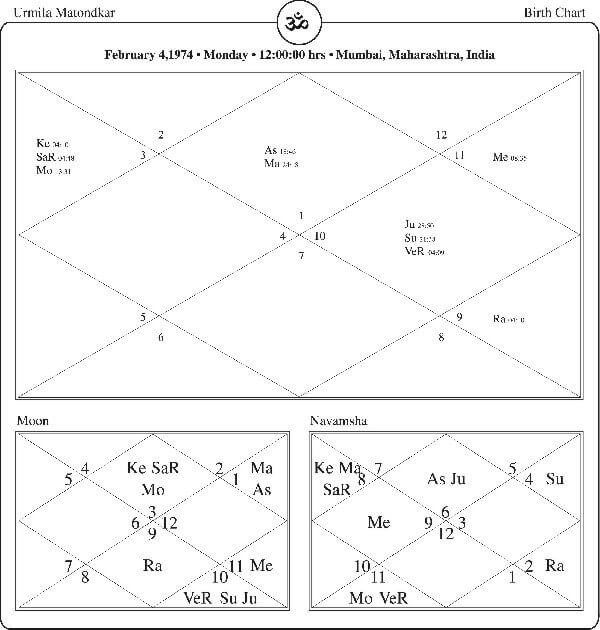 Since her exact Birth time is not confirmed, we take her ‘Surya Kundali’ for consideration.

Urmila Matondkar, Indian Film Actress is born with mighty Sun in last of earth sign Capricorn. Sun keeps company of retrograde Venus and debilitated Jupiter in Capricorn. This position leads her to become a strong personality and good at organizing things. Urmila Matondkar, Indian Film Actress is also good at man management. Crafty Mercury is in a fixed nature last of air sign Aquarius. Mercury is positioned in the second house for her Sun sign. Viewing this Urmila Matondkar tends to deliberate well enough before taking a plunge. Mars is in own sign Aries and positioned in the fourth house for her Sun sign. Ruler of her Sun sign Saturn is retrograde in a dual nature air sign Gemini along with malefic Ketu and Moon. All are stationed in the sixth house. Shadow planet Rahu is in a dual nature last of fire sign Sagittarius. Rahu is positioned in the 12th house.

In Navmansha D9 chart, Mars is in own sign Scorpio and gathers strength.

Hard task master Saturn currently transits in a dual nature last of fire sign Sagittarius. Saturn moves through the 12th house for her Sun sign. From 30th April Saturn becomes retrograde in motion. This movement of retrograde Saturn through the 12th house is to present new challenges for Urmila Matondkar, Indian Film Actress. Retrograde Saturn moves through the 12th house in direct opposition to its own radical position and also that of Moon. Urmila Matondkar, Congress Leader needs to remain aware about ground reality and work hard over the new challenges to make sure she wins in current Lok Sabha election. She needs to formulate a sound strategy to score over her rivals effectively.

Malefic Ketu entered last of fire sign Sagittarius from 7th March. Ketu moves through the 12th house in company of wily Saturn. This movement of two malefic through the 12th house does not seem much supportive for progressive forces to work effectively. Viewing thus, Urmila Matondkar, Indian Film Actress has to exert more to achieve her goal to win in current Lok Sabha election.

Shadow planet Rahu entered a dual nature air sign Gemini from 7th March. Rahu moves through the sixth house in opposition to its own radical position in the 12th house. Rahu moving through the sixth house crosses over radical position of Moon and retrograde Saturn stationed in the sixth house. This position leads Urmila Matondkar, Congress Leader to make a determined effort to win in current Lok Sabha election. Progressive forces are to work effectively and supporting efforts by Urmila Matondkar, Congress Leader to win in current Lok Sabha   election. Urmila Matondkar, Congress Leader needs to accept new challenges willingly and go all out to work over the same to achieve her objective to win in current Lok Sabha election.

Jupiter entered own sign Sagittarius from 30th March. Soon from 11th April Jupiter became retrograde. From 23rd April Jupiter moving in retrograde mode enters a fix nature water sign Scorpio. Jupiter then moves through the eleventh house, linked with fulfillment of wish among other things. This movement of retrograde Jupiter is to work well for Urmila Matondkar, Indian Film Actress to get more support from people around her. In turn this movement of retrograde Jupiter through the eleventh house is work well to fulfill her wish to win in current Lok Sabha election. However, Urmila Matondkar, Congress Leader needs to keep exerting more to win in current parliamentary election. 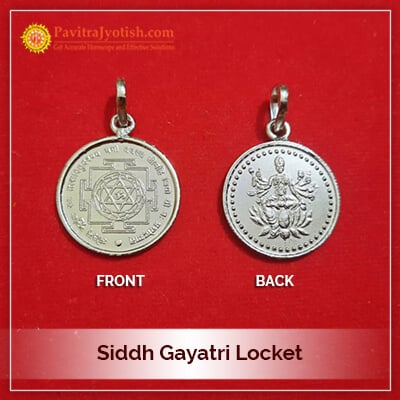 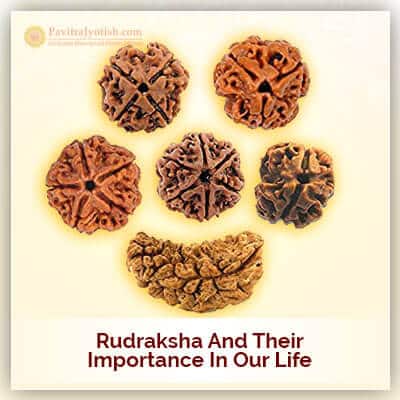 Rudraksha and their Importance in your Life >>