Vijay Rupani As Revealed In This Astrological Analysis

Vijay Ramniklal Rupani is a noted Indian politician currently serving as the Chief Minister of Gujarat. He is also a Bharatiya Janata Party leader and an active member of the Gujarat legislative assembly. He was born in Rangoon, Burma in the year 1956. Prior to becoming a political leader, Vijay Rupani, Chief Minister of Gujarat handled his father-founded business called Rasiklal & Sons as a stockbroker. He later joined RSS and then Jan Sangh (1971) and remained associated with BJP since the time the party was brought into existence. He also served jail terms during the time when Emergency (1976) was in effect. When Narendra Modi was the Chief Minister of Gujarat, Vijay Rupani served four times as a Gujarat unit general secretary and graced Gujarat Municipal Finance Board as its chairman in 2013. He later became MLA by winning the bypoll held in 19 October 2014 and on November 2014, he was inducted as the cabinet minister by the then CM of Gujarat, Anandiben Patel and graced the ministry of transport, water supply, labor and employment. He became CM of Gujarat on 7 August 2016.

PavitraJyotish does an astrological analysis on different aspects of Vijay Rupani through the following horoscope chart.

Birth Details of Vijay Rupani are as per given below: 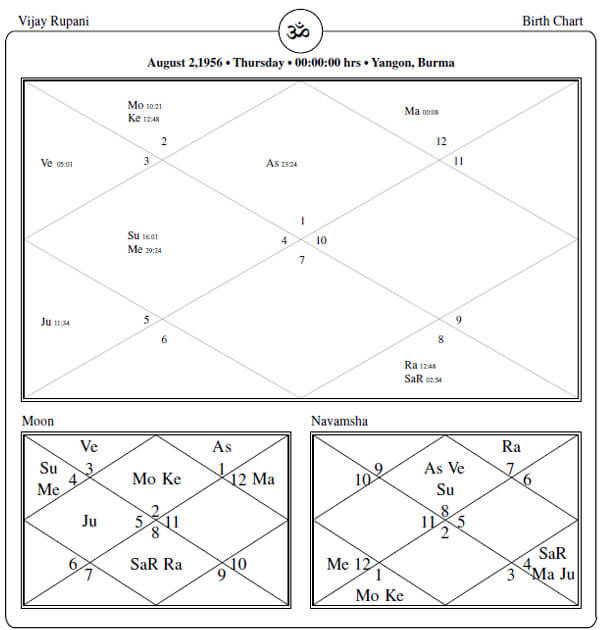 Vijay Rupani, Chief Minister of Gujarat is born with Aries Ascendant. Aries Zodiac Sign is ruled by commander in chief Mars. This induces him to be keen at taking initiative and lead a team. He is committed to his work. Ruler of the Ascendant Mars is in a dual natured last of water sign Pisces and positioned in the 12th house. Mars keeps him conscious about his responsibility. Ruler of the 12th house Jupiter is in a fire sign Leo ruled by mighty Sun. Jupiter is placed in the fifth house. Jupiter also rules the ninth house linked with luck in general, long distance travel and blessings of higher soul. Jupiter has aspect on the ninth house and the Ascendant as well. Aspect over the ninth house leads to beneficial ‘Raj Yog’. This works well for him to rise in politics. Ruler of the fifth house mighty Sun is in a water sign Cancer along with crafty Mercury and stationed in the fourth house. This union of Sun and Mercury leads to him becoming highly intelligent. Ruler of the fourth house, Moon is in its sign of exaltation Taurus along with malefic shadow planet Ketu, and stationed in the second house, linked with finance and family mainly. This position leads to have a strong position on financial front. Venus rules the second and the seventh house. Venus is in a dual natured air sign Gemini and camps in the third house in his birth chart. He has good ability to know commercial value of a thing. Crafty Mercury rules the third and the sixth house in his birth chart. Mercury is in a water sign Cancer along with mighty Sun. Both are stationed in the fourth house. Wily Saturn owns the tenth and the eleventh house. Saturn is in a fix natured water sign Scorpio along with malefic Rahu. Both are placed in the eighth house, in opposition to Moon stationed in the second house. He has proved as good at formulating strategy.

In Chalit chart Mars shifts to the eleventh house, and wily Saturn in the seventh house.

Mercury is combust and Saturn Retrograde in his birth chart.

In Navmansha D9 chart Mercury and Mars are debilitated.

From March 27th 2018 to October 26th 2019 he is under the influence of sub period of Moon and major period of Saturn.

Is something on mind to share with us? Talk to Astrologer and know best answers of your life’s various problems.

Ruler of the Ascendant and the eighth house Mars now moves in retrograde mode in its sign of exaltation Capricorn and moves through the tenth house. From around end of August 2018 Mars becomes direct in motion and keeps transiting in Capricorn till around beginning of November 2018. Transiting Mars has aspect over the Ascendant and the fourth house. Influence of Mars over the Ascendant is to energize and keep him active. He has to now have purpose to work upon. Progressive forces are to work effectively here for Vijay Rupani horoscope Exalted Mars moving through the tenth house is in opposition to radical position of mighty Sun and Mercury stationed in the fourth house. He can get worked up if things do not move as planned by him. Vijay Rupani, chief minister of gujarat. needs to keep his cool and handle this much tactfully for good. Progressive time for him during movement of exalted Mars. However, there is a possibility of getting injured unexpectedly. He needs to take due care in this regard.

From around beginning of September 2018, dear Venus enters its own sign Libra. Venus now moves through the seventh house in his chart. Some kind of meaningful relationship is to take shape here. Vijay Rupani, Chief Minister of Gujarat needs to execute due caution in new relationship and not overly lean over the concerned person. In confirm relationship he is to have a pleasant time.

Benevolent Jupiter currently transits in an air sign Libra and moves through the seventh house in his chart. Transiting Jupiter is to eye radical position of Venus camping in the third house. This seems a happy proposition for Vijay Rupani. However, this movement does not seem supportive for having harmony in a confirm relationship. He needs to be more accommodative and much tactful in handling issue if any in a confirm relationship. Vijay Rupani is to have a pleasant time with near ones in relationship.

From around mid of October 2018 Jupiter enters a fix natured water sign Scorpio. Jupiter now traverses through the eighth house. In process Jupiter crosses over radical position of wily Saturn and malefic shadow planet Rahu (north node) placed in the eighth house. This indicates that he has to learn few things to maintain his position as a Chief Minister of Gujarat. Jupiter Transit in opposition to radical position of exalted Moon place in the second house. This position seems supportive for him. This is indicative of kind of progressive and prosperous period for Vijay Rupani.

From around the beginning of November 2019, Jupiter again enters its own sign Sagittarius. Jupiter transits in Sagittarius till end of year 2019 and beyond. This movement of Jupiter through the ninth house seems a happy proposition for Vijay Rupani, Chief Minister of Gujarat. This is indicative of progressive and prosperous time for him.

Shadow malefic planets Rahu – Ketu currently transit in Cancer and Capricorn respectively. Rahu moves through the fourth and Ketu moves through the tenth house. These movements of malefic do not seem to be a happy proposition for Vijay Rupani. He is to have kind of challenging time for him. He has to exert more to maintain his position as a Chief Minister. He needs to keep his cool and have patience on his side.

From around March 2019, Rahu enters air sign Gemini. Ketu enters last of fire sign Sagittarius. Rahu moves through the third house and crosses over radical position of Venus stationed in the third house. Vijay Rupani needs to execute due caution in confirm relationship. He needs to handle issue if any much tactfully for good. Ketu moves through the ninth house in company of wily Saturn. This does not seem a happy proposition for him. Long distance travel is not to work well for him. Vijay Rupani needs to take care about sensibilities of senior colleagues here. This seems a kind of challenging time for him here.

Overall deliberating well enough on movements of major planets during 2018 -2019 is to be much positively eventful and challenging as well. Progressive forces are to work much effectively for Vijay Rupani.

Astrological Phone Consultation with our renowned expert Astrologer to discuss about your concerns and get an answer.

Don’t forget to read: About Naveen Patnaik Horoscope and About Nitish Kumar Horoscope 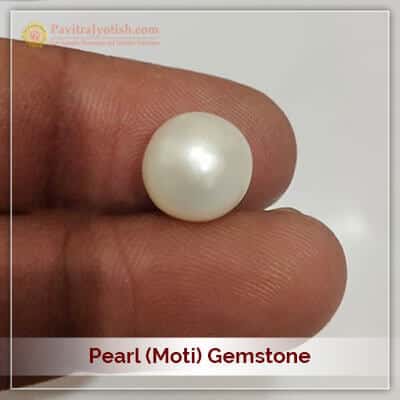 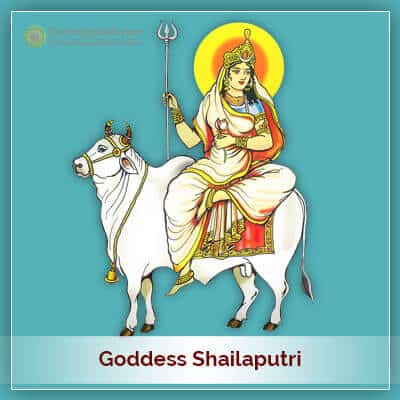