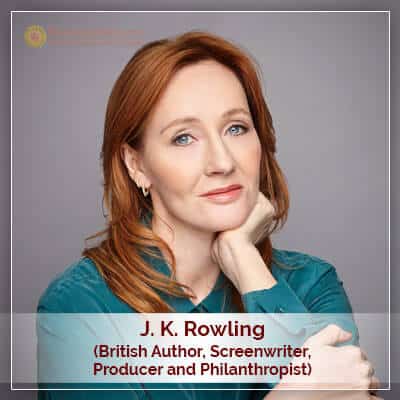 The famous author of world’s perhaps most successful Harry Potter fantasy series, Joanne Rowling, or J. K. Rowling was born on 31 July 1965 in Yate, Gloucestershire, to her parents, Anne (née Volant) and Peter James Rowling. Her preliminary education began at St Michael’s Primary School. Later, she attended secondary school at Wyedean School and College, and completed her BA in French and Classics at the University of Exeter. J. K. Rowling is a distinguished personality as an author, screenwriter, producer and philanthropist. The Harry Potter fantasy series have made her an international celebrity icon. Cinematic adaption of these fantasy series was also commercially and critically very successful worldwide. Emma, written by Jane Austen, is her favorite book, and she also said that Jessica Mitford, a civil rights activist and an English author, had great influence on Rowling since the age of 14. Get your 5 Years Predictions report.

We at PavitraJyotish are conducting an astrological analysis on the life of J. K. Rowling in the following astrological chart and representational narrative of the same.

Birth Details of J. K. Rowling are as per given below: 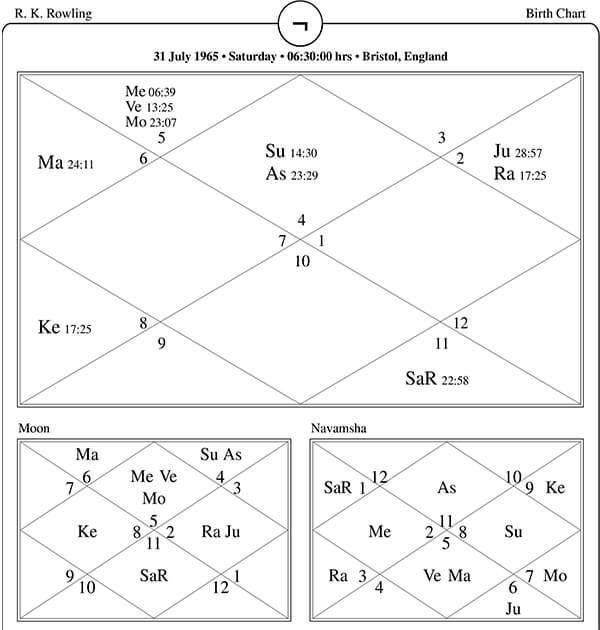 J. K. Rowling, Screenwriter is born with mighty Sun in a cardinal water sign Cancer and ruled by moody Moon.

Cancer Zodiac Sign is one of the most intriguing Signs of the Zodiac. Ruled by Moon, the moody temperamental Cancer is a sensitive, emotional, watery sign, and can be closely associated to its animal symbol ‘Crab’. From being quiet and shy at a time to being outspoken, flamboyant and strong at others, Cancer is a Sign of many extremes. They follow their ‘heart’ and intuition and while making a decision, or when they want to decide whether something is right or not, they depend on their ‘feeling’. If they feel it is right for them. If all is well with them, the Crabs can be admirably kind, generous, understanding and gracious. Although people born under the Zodiac Sign Cancer are extremely moody and often confused, they cannot afford to be the same when it comes to financial matters and business dealings—hints Cancer’s money planet—Sun.

Ruler of the solar chart Moon is in a fire sign Leo along with Mercury and Venus. Here Moon and Sun exchange sign. This makes J. K. Rowling, British Author to write fantasy which becomes very popular in due course of time. J. K. Rowling, Screenwriter also remains in a strong position on financial front. Mars being ruler of the tenth house is in a dual nature earth sign Virgo. Mars here makes her courageous and take well calculated risk to push ahead her prospects as a writer. J. K. Rowling is also good at using weapon. Jupiter is in earth sign Taurus along with shadow planet Rahu gets placed in the eleventh house. In view of this, J. K. Rowling, British Author needs to execute due caution in new friendly relationship. J. K. Rowling needs to avoid temptation to benefit monetarily and stick to basics. Malefic Ketu is in water sign Scorpio and gets placed in the fifth house in solar chart. Wily Saturn is retrograde in own sign Aquarius and stationed in the eighth house. This indicates that some discontent keeps brewing in psyche of J. K. Rowling. J. K. Rowling needs to direct the discontent to do more creative writing for her own good. Saturn is in opposition to Moon stationed in the second house. This position enables J. K. Rowling to formulate a strong strategy to achieve her objective at earliest. Viewing retrograde Saturn having an eye over the second house, J. K. Rowling needs to plan her finance with long term in view and keep enough provision for contingency.

In D10 chart Sun along with Rahu is positioned in the tenth house. In opposition to this exalted Mars along with malefic Ketu is placed in the fourth house. This position leads J. K. Rowling, British Author to write fantasy and achieve success as an able writer.

On viewing position of planets in Cancer solar chart and deliberating on effect of transit by major planets we try to view on prospects of J. K. Rowling, Screenwriter in near future.

Wily Saturn currently transits in own sign in retrograde mode and moves through the seventh house. Saturn moves in opposition to Natal Sun in due course of time. This opposition can present new challenges for J. K. Rowling. J. K. Rowling, Screenwriter needs to take a view of ground reality and accept new challenges willingly. However, Saturn moving in retrograde mode slows down pace of progress. Viewing this J. K. Rowling, British Author needs to keep her cool and patiently wait till things start move favourably for her. J. K. Rowling plans to write something which becomes immensely popular.

Benevolent Jupiter currently transits in its sign of debilitation earth sign Capricorn in retrograde mode. Retrograde and debilitated Jupiter moves through the seventh house in company of retrograde Saturn. Jupiter moving through the seventh house, aspects natal Mars and also has an eye over the tenth house, linked with occupation. This influence of Jupiter pushes progressive forces to work. However, with Jupiter being retrograde its positive vibes does not render any positive results.

From July 2020, Jupiter moving in retrograde mode, enters own sign Sagittarius. Retrograde Jupiter moves through the sixth house in solar chart. From around mid of September 2020, Jupiter becomes direct in motion. Jupiter moving through the sixth house aspects the tenth house and also has an eye over the second house along with Natal Moon, Natal Mercury and natal Venus. Positive vibes of Jupiter become more effective. This movement and influences of Jupiter induces a kind of idle time for J. K. Rowling, to write some fantasy which becomes immensely popular. This leads to handsome financial gain for J. K. Rowling, Screenwriter.

Two major planets are transiting in own sign and moving through major important houses in Cancer solar chart. This surely indicates much prospective time ahead in near future for J. K. Rowling, British Author. 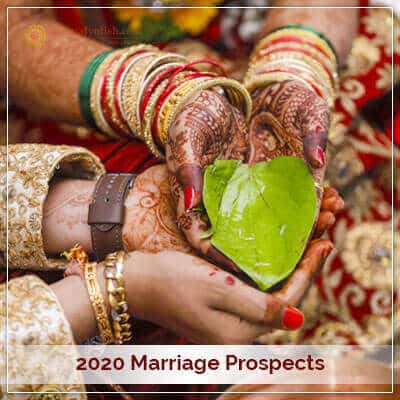 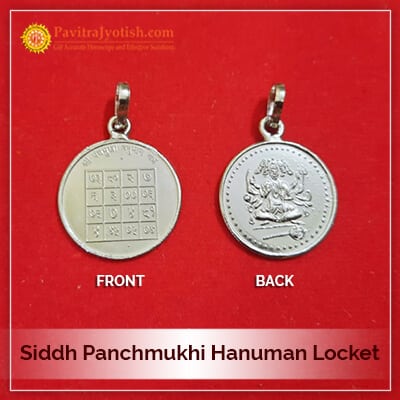 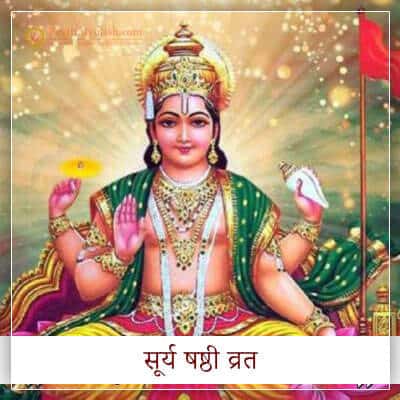