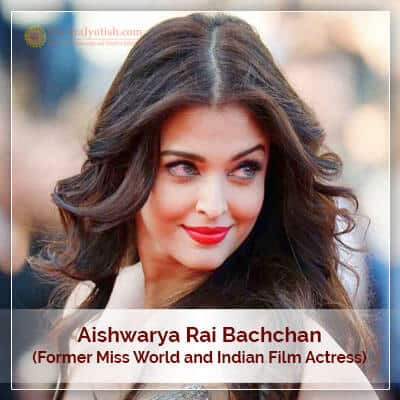 Aishwarya Rai Bachchan is a well-known celebrity and Bollywood actress, model, and the wife of the famous actor, Abhishek Bachchan, who is the son of megastar Amitabh Bachchan.  Former Miss World winner (1994) and the recipient of the prestigious civilian award, Padma Shri by the Government of India and an award of the Ordre des Arts et des Lettres by the Government of France, Aishwarya has her own distinctive aura accentuated by media reference as “the most beautiful woman in the world” and by critiques praising her for being a powerful actress in films. Born and raised in Mangaluru, Karnataka in 1973, Aishwarya Rai Bachchan, Former Miss World and Indian Film Actress has appeared in almost 46 films, most of them commercially successful. Drama-based movie Hum Dil De Chuke Sanam proved to be a breakthrough in her acting career for which she won two trophies for best actress and 10 nominations for Filmfare Award. She also appeared in brand endorsement and humanitarian work and stage performance.

We at PavitraJyotish do an astrological analysis of the Aishwarya Rai Horoscope chart as detailed below.

Birth Details of Aishwarya Rai Bachchan are as per given below: 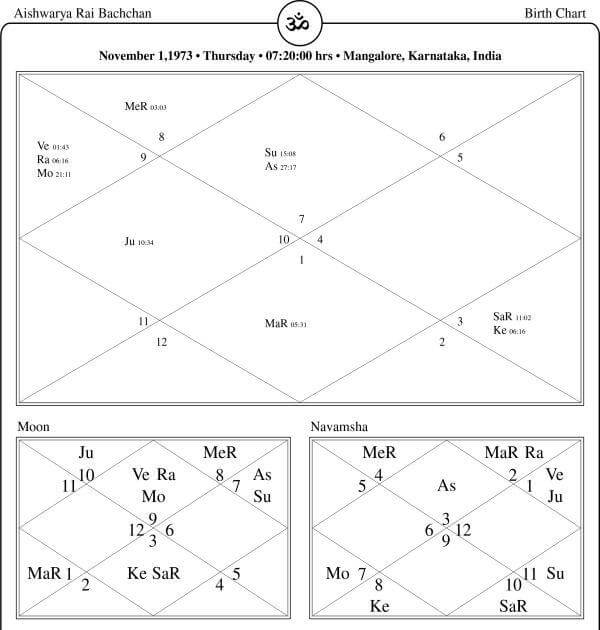 Aishwarya Rai, Former Miss World is born with Libra Ascendant. Libra is ruled by dear Venus. Libra is the seventh sign of the zodiac. Libra is the only sign having a non living object as symbol. Libra is symbolized by scales. Going by its symbol Libra native is excellent at maintaining equilibrium and balance. The well known peace-maker of the zodiac is a diplomatic, refined and generally a harmonious sign. Ruler of the Ascendant Venus is in dual natured last of fire sign Sagittarius. Venus is here accompanied with Moon and malefic shadow planet Rahu and gets placed in the third house. Benevolent Jupiter rules the third and the sixth house. Jupiter is debilitated in an earth sign Capricorn and stationed in the fourth house. Saturn is measured as most beneficial planet for Libra Ascendant. Saturn is in a dual natured air sign Gemini and positioned in the ninth house along with malefic shadow planet Ketu. Mercury holds the portfolio of the ninth and the 12th house.  Mercury is retrograde in a fix nature water sign Scorpio and positioned in the second house. This position of Mercury works well in being in a sound position on financial front. Ruler of the second house Mars is retrograde in its own sign Aries and stationed in the seventh house. This leads to issue with one in a confirmed relationship. Mighty Sun is debilitated in air sign Libra and positioned in the first house. Sun and retrograde Mars are in opposition to each other.

In Navmansha D9 chart, Saturn being in its own sign Capricorn and becomes stronger.

Wily Saturn currently transits in a dual nature last of fire sign Sagittarius and moves through the third house. During transit through the third house, Saturn crosses radical position of Venus, Moon and malefic Rahu. This movement of Saturn leads to kind of challenging situation on occupational front for Aishwarya Rai Bachchan, Indian Film Actress. Aishwarya Rai, Former Miss World has to exert more to keep things moving favorably in occupational front. Aishwarya needs to be careful while signing new deal. A major change in her career is foreseen for her. Aishwarya Rai, Former Miss World needs to handle matter related to finance much carefully. Aishwarya needs to much careful about her health during this movement of Saturn. Aishwarya Rai Bachchan, Indian Film Actress is to have much eventful, progressive and also much challenging as well during transit of Saturn in Sagittarius.

From around March 2019, Rahu enters a dual natured air sign Gemini. Rahu now moves through the ninth house. During traversing through the ninth house, Rahu crosses over radical position of Saturn and Ketu stationed in the ninth house. This can lead to more visits to foreign country. Aishwarya Rai needs to take care about her baby Girl. Visit to a highly revered religious place is to have positive refreshing effect on her psyche.

Do you know most Marital Problems end up in separation or divorce due to faulty kundali match matching? Choose our expert Kundali Match Matching to find suitable life partner.

From around March 2019, malefic Ketu enters a dual natured last of fire sign Sagittarius. Now Ketu in company of wily Saturn moves through the third house. During this transit both are to cross radical position of Moon, Venus and Rahu, positioned in Sagittarius. This movement of both malefic is to act as obstructionist force. Aishwarya Rai needs to keep her cool and have patience on her side. Things are not to move as desired by Aishwarya. This seems kind of challenging time for her.

From 5th November 2019 Jupiter enters its own sign Sagittarius. Jupiter now moves through the third house, in company of wily Saturn and malefic Ketu. This movement of Jupiter is to work well in minimizing evil effects of Saturn and Ketu. This indicates a progressive period for Aishwarya. Jupiter is to keep transiting in Sagittarius till end of the year 2019 and beyond.

Deliberating well enough over transits of major planets, period during 2018 and whole of 2019, seems much eventful, progressive and prosperous time for Aishwarya Rai, Former Miss World. In between Aishwarya Rai Bachchan, Indian Film Actress is have some challenging time as mentioned above. 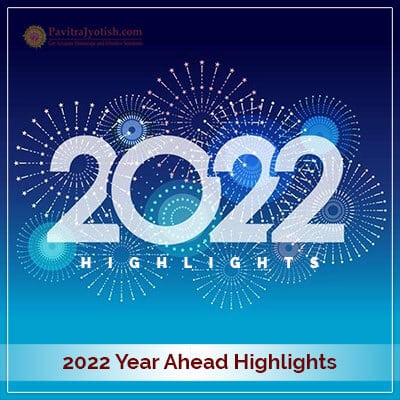 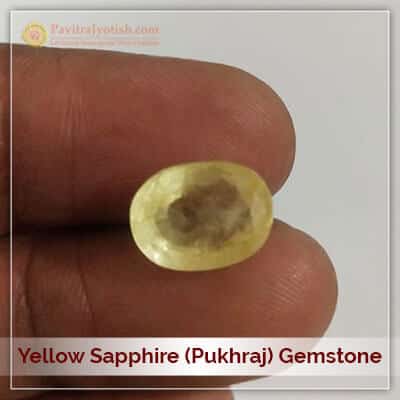 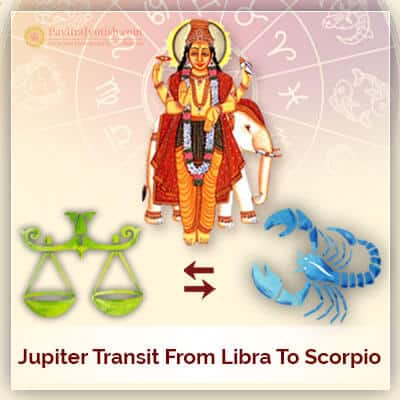