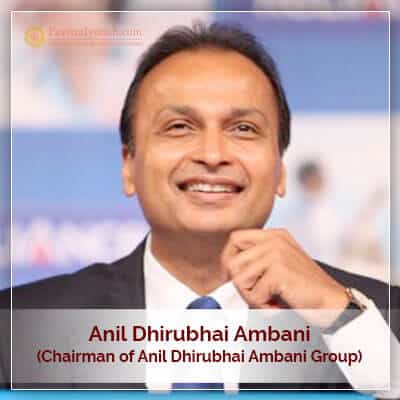 Anil Dhibubhai Ambani And His Life As Astrologically Revealed Here

Anil Dhirubhai Ambani, Chairman Reliance Group is one of the most distinguished and reputable businessmen in India. He is also a younger brother of Asia’s richest businessman, Mukesh Ambani. His company came into existence in the aftermath of the demerger of Reliance Industries Limited. His business empire involves running services related to media, infrastructure, Defence, and financial Services. It should be noted that his venture, Reliance Defence is the fusion of diverse ventures, some of which are quite distinguished, such as – Israel’s Rafael Advanced Defense Systems, and Dassault Aviation of France. Entertainment is one of the other ventures of Anil which covers DTH business all over India, animation studios, 44 FM radio, and numerous multiplex cinemas across the country. His wife Tina Munim has been a former Bollywood actress. The couple has two sons. Anil was educated in MBA from the Wharton School of the University of Pennsylvania in 1983.

At PavitraJyotish, we are conducting an astrological analysis on the life of Anil Ambani, Chairman Reliance Group in the narrative as indicated in the following horoscope chart.

Birth Details of Anil Ambani are as per given below: 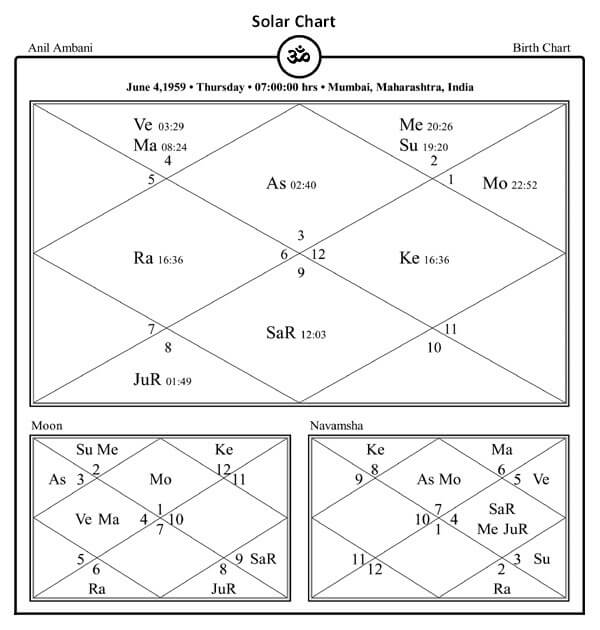 He is born with Sun in a fix natured earth sign Taurus with Mercury in close connection. Taurus the second sign of the zodiac is a practical, reliable and headstrong much like its symbol Bull. Taurus native also has their soft side. The native is Capable of being loyal and very much affectionate. Native is often good and only with whom he wants to. Physical fitness for Anil Ambani, Chairman Reliance Group is of prime importance. He works hard to keep himself physically fit. He is said to run for 21 kilometers daily for fitness. Mercury in close conjunction makes him very intelligent have sharp brains to gauge a situation. Moon in Aries shows his eagerness to take initiative to establish himself. Venus and Mars together with a water sign Cancer-induced him to take interest in music, films. Anil Ambani, Chairman Reliance Group is kind of emotionally worked up to make a mark in his pursuit and enjoy life to fullest. Planets holding him to become a successful businessman are major planets Jupiter and Saturn being in retrograde mode. His ambitious plans have not been worked as wished by him. His company has come under heavy debts. In turn, he needs to sell his assets fast to reduce the burden of heavy debt. Pavitra Jyotish here tries to explore, access his prospects in future by viewing his Surya Kundali.

Lately, movement of wily Saturn from around end of November 2016 and last year of Mars through highly passionate fix natured water sign Scorpio in direct opposition to natal Sun has adversely affected his business. Now from around of October 2017, he is under influence of Saturn return. If you have retrograde Saturn at the time of birth, means you are in for some hard lessons to learn. Saturn now operating in eighth house from natal Sun is likely to shake him. His efforts to sell some assets can get delayed. This again increases pressure on him to reduce debt at earliest. Moves by his elder brother Mukesh Ambani has lent a serious blow to his company Reliance communications. Slashing rates sharply has shaken the telecommunication business as a whole. Malefic Rahu now traversing through water sign Cancer is to cross over a radical position of Mars and Venus can add to his woos.

Movement of Saturn in Sagittarius is to induce him to diversify and venture into a new field. However, this can take more time to settle in his new pursuit. From around May to around end of October 2018 Mars transits through its sign of exaltation earth sign Capricorn ruled by Saturn. He may then go for some aggressive measures to steady the ship. Here things may not work well for him on the physical health front. A serious kind of injury can hurt him. He needs to take due care in this regard. There is a likelihood of some foreign-based company coming to his rescue by buying some of his valuable assets like Towers erected all around. Movement of dear Venus in its own sign airy Libra from August to end of the year 2018 is likely to provide some respite for him.

Further trouble for him is envisaged during the year 2019. Malefic Ketu (south node) makes the entry in Sagittarius from around the beginning of March 2019. Ketu then joins a company of wily Saturn already moving through Sagittarius in eighth house from natal Sun. This movement of Saturn and Ketu can put him in a further fix. Share prices of his company can head south ways. A short time visit of Jupiter during April 2019 may raise hopes of survival.

However, the major revival of his fortune is likely to begin from around end of November 2019. Soon from the year 2020, Saturn is to start traversing through own earth sign Capricorn, in the ninth house from his natal Sun. This is to make him more practical adjusting to ground realities.

Have an appointment with seasoned expert Astrologer in Delhi to talk in detail about the answer to your problem and due remedial measure also to perform. 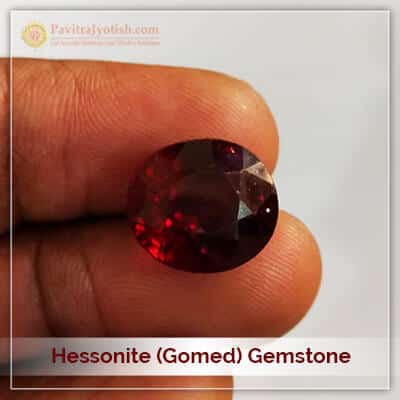 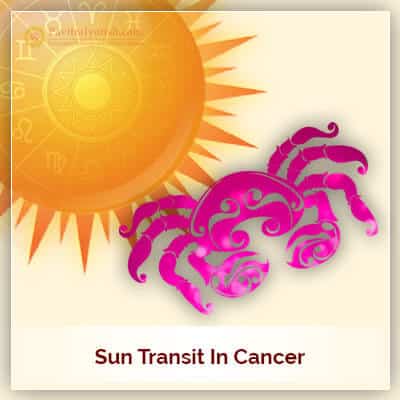