Astrological Insight Into The Life Aspect Of Uday Kotak

Born on 15 March 1959 in an upper-middle-class Gujarati Lohana joint-family, Uday Kotak, Managing Director of Kotak Mahindra Bank is a name known as India’s billionaire banker. Besides, he is also known as the executive vice chairman and managing director of Kotak Mahindra Bank. He did his graduation from Sydenham College and finished his postgraduate degree in management studies in 1982 from Jamnalal Bajaj Institute of Management Studies. In the early phase of his life, instead of becoming a job holder in a multinational company, he tossed away the idea and followed his dream to set up his own business. It was an era of 1980 when the economy growth of India was in stalemate. In due course of time, he made sure that his commercial venture is diversified and so, he segmented it into different areas of financial services. Doing so made him a very powerful persona in the domains of bills discounting, stockbroking, investment banking, car finance, life insurance and mutual funds. His company, Kotak Mahindra Finance Ltd, received its banking license from Reserve Bank of India on 22 March 2003. Regarding his honorary accolades, he was named Ernst & Young World Entrepreneur Of The Year.

Team PavitraJyotish is conducting an astrological analysis on the life of Uday Kotak. The following Horoscope chart and subsequent narratives symbolise the same.

Birth Details of Uday Kotak are as per given below: 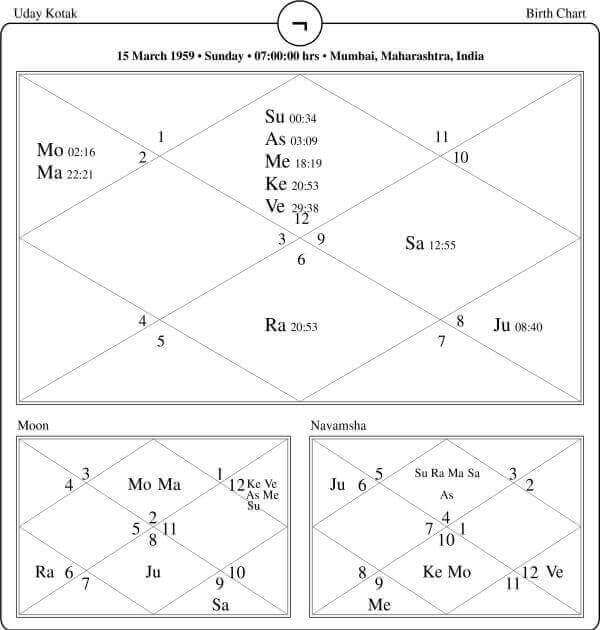 Poetic Pisces, the last in line of the Zodiac Signs, is as mystical and intuitive as they come. Pisces can be described in nutshell in the following words; Sensitive, spiritual, scrupulous, stubborn and often sympathetic yet shrewd.  Pisces native prefer to be at familiar places and trustworthy company. They have their own set—patterns of living and choose to be surrounded by genuine people whom they trust. Unfamiliarity is a no-no! But like others, they too cannot avoid such situations and people – this makes them uncomfortable and fidgety. It is here where their creative pursuits come to their rescue. Their area of interest often is the work that is philanthropic or social in nature.

Sun in Pisces is accompanied by malefic Ketu, Mercury and exalted Venus. This position leads to have a sharp intelligence and have quick grasp of things, situation. Philanthropic inclination of Uday Kotak, Indian Billionaire Banker is expressed by this union of four planets. Moon is exalted in earth sign Taurus and along with Mars is stationed in the third house. This position enables Uday Kotak to take calculated risk to push ahead his prospects. Wily Saturn rules the 12th house and also holds portfolio of the eleventh house, linked with gain. Saturn is in a dual nature last of fire sign Sagittarius and positioned in the tenth house for his Sun sign Pisces. Saturn here induces Uday Kotak, Managing Director of Kotak Mahindra Bank to remain determined to achieve his goal. Benevolent and ruler of Pisces Jupiter is in a fix nature water sign Scorpio and stationed in the ninth house. Jupiter is in direct opposition to exalted Moon and Mars positioned in the third house. This opposition makes Uday Kotak, Indian Billionaire Banker richer and wealthier. Jupiter has aspect over mighty Sun, malefic Ketu, Mercury and exalted Venus. Jupiter keeps supporting Uday Kotak to make encouraging progress in his pursuit as a banker. Shadow planet Rahu is in a dual nature earth sign Virgo.

In ‘Surya Kundli’ Venus and Moon are exalted.

In D10 chart, Jupiter being lord of the Ascendant is positioned in the tenth house. Mars and Venus are stationed in the ninth house. These positions support Uday Kotak, Indian Billionaire Banker to succeed as banker and also induce him to be philanthropist.

On viewing planetary positions in ‘Surya Kundli’ of Uday Kotak, Managing Director of Kotak Mahindra Bank and deliberating on effect of transit by major planets, we try to explore prospects of Uday Kotak in near future.

Wily currently Saturn Transit in own sign Capricorn and moves through the eleventh house for Pisces Sun sign. Saturn moving through the eleventh house has aspect over radical position of mighty Sun, Mercury, malefic Ketu and exalted Venus. This aspect of Saturn indicates beginning of new development for Uday Kotak, Managing Director of Kotak Mahindra Bank. He needs to remain aware about ground reality and make moves accordingly. Some new challenges come up on road to progress for Uday Kotak, Indian Billionaire Banker. He should not shy from new challenges and accept the same willingly. Uday Kotak needs to keep working over the new challenges to make desirable level of progress. This movement of Saturn leads to progressive and somewhat challenging time for Uday Kotak, Indian Billionaire Banker.

Shadow Planet Rahu currently transits in first of air sign Gemini and moves through the fourth house. Malefic Ketu moves through the tenth house. These movements of Rahu and Ketu indicate major change for good of Uday Kotak, Managing Director of Kotak Mahindra Bank. Amid some hiccups Uday Kotak keeps moving on road to progress. This movement of shadow planet adds to prosperity of Uday Kotak, Indian Billionaire Banker.

From end of March 2020, Jupiter enters its sign of debilitation earth sign Capricorn. Now Jupiter moves through the eleventh house in company of Saturn already moving therein. This movement of two major planets surely indicates something bigger is in offing for Uday Kotak in near future. This movement of two major planets indicates gainful time for Uday Kotak, Managing Director of Kotak Mahindra Bank.

From mid of May 2020, Jupiter becomes retrograde. From end of June 2020, Jupiter moving in retrograde mode again enters own sign Sagittarius. Jupiter now again moves through the tenth house. From around mid of September, Jupiter becomes direct in motion. Now Jupiter direct in motion, its positive vibes are to be much strong. This enables Uday Kotak to reach new heights as a Banker and business person. Forces which support higher growth for Uday Kotak are to work much effectively. This movement of Jupiter facilitates encouraging opportunity to have something big in his lap.

Two major planets transiting in own sign surely leads to vertical growth for Uday Kotak, Indian Billionaire Banker. Something big is to be achieved by Uday Kotak in near future. Progressive and prosperous time ahead for Uday Kotak is foreseen.

After viewing planetary positions in Meen ‘Surya Kundli’ of Uday Kotak, Managing Director of Kotak Mahindra Bank and effect of transit by major planets in near future, encouragingly progressive and prosperous time is foreseen for Uday Kotak. Get Business Problems Solution Astrology by our Astrologer In Delhi.

Know Sun Transit In Aries (Mesh Rashi) On 14th April 2018, Mars Transit In Capricorn (Makar Rashi) On 2nd May 2018 on our website that features these details at length. Get to know About Anshula Kant Horoscope, About Shiv Nadar Horoscope featured on our celebrity content category. We have safe Payment Options for our customers to ensure unbreachable and safe digital transaction. 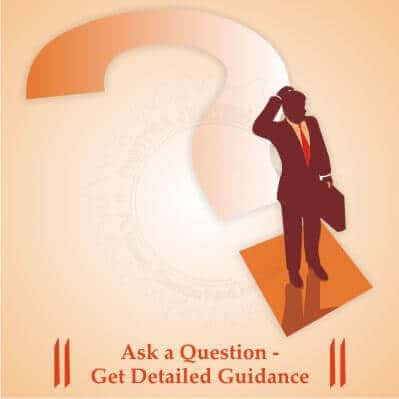 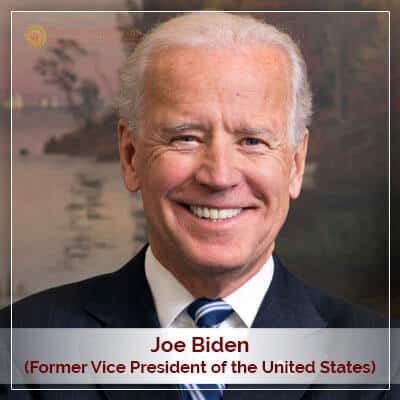