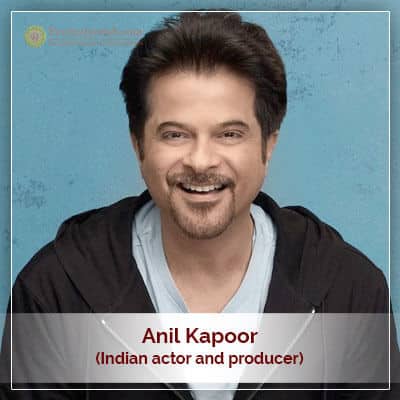 Anil Kapoor And His Life As Viewed From Astrological Observation

Anil Kapoor, Indian Film Actor and Producer is one of the most distinguished, eminent and broadly-known celebrity icons in India who works in Hindi cinema and has been one of the instrumental figures of it. Through brilliant cinematic performance and years of hard works, Anil today is known as one of the versatile actors having worked for more than 35 years in the Hindi film industry and received several awards, including 2 National Film Awards and 6 Filmfare Awards in recognition of his performance in various cinematic categories. Mumbai-born Anil is the son of noted film producer Surinder Kapoor and younger brother of Boney Kapoor and elder brother of Sanjay Kapoor, also a noted film actor. Founder of Noida Film City and owner of Marwah Studios, Sandeep Marwah is the brother-in-law of Anil Kapoor. Anil is married to Sunita Bhavnani. The couple has two daughters, Sonam Kapoor, Rhea Kapoor and a son, Harshvardhan Kapoor.

The first cinematic appearance of Anil had with the (unreleased) movie Tu Payal Mein Geet in 1971 at the age of 12 years in which he played the role of young Shashi Kapoor. Later he debuted with Umesh Mehra’s Hamare Tumhare in which he was cast for a small role. He also acted in Tamil movie, VamsaVruksham as a lead actor in 1980. He rose to prominence after Mashaal in which he played a tapori role. The movie gave him a widespread recognition and won him first Filmfare Award in the category of best-supporting actor. Anil Kapoor, Producer reprised the same tapori role in the blockbuster film, Karma (1986). Most of his movies were critically and commercially successful, including Mr. India, Tezaab with Madhuri Dixit, Ram Lakhan, Parinda, Pukar, and so on. As a producer, the first film under his production was Badhaai Ho Badhaai. Anil was awarded with the National Film Award – Special Jury Award / Special Mention for Gandhi, My Father that he produced.

At PavitraJyotish, we are conducting an astrological analysis on the life of Anil Kapoor. The astrological chart as follows is the depictive narrative of the same.

Birth Details of Anil Kapoor are as per given below: 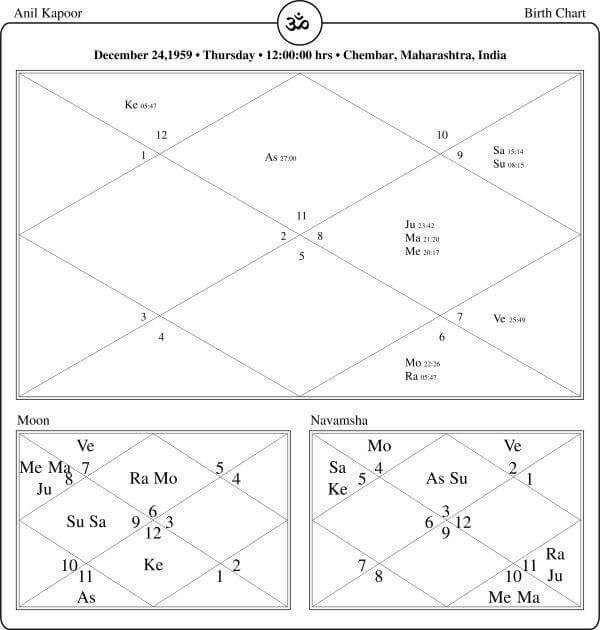 The most individualistic and free of Zodiac signs, Aquarius is a paradox in itself. Aquarius natives are fiercely independent, modern, even wild and eccentric at one go and fair, just and absolutely humanitarian at the other. People born with Aquarius Ascendant are methodical, intellectual, observant and have clarity of thoughts. They are effective interpreters and analyzers of information, they possesses an excellent ability for abstract and lateral thinking – ability to view things with varied perspectives. They are often quite generous, when it comes to parting with their wealth and giving it away for the right cause.

Ruler of the Ascendant Saturn Transit in a dual nature last of fire sign Sagittarius. Saturn is stationed in the eleventh house along with mighty Sun. This position indicates of having large number of fans for Anil Kapoor, Indian actor and producer. Jupiter rules the eleventh house and also holds portfolio of the second house linked with finance and family mainly. Jupiter is in fix nature water sign Scorpio along with crafty Mercury and ruler of Scorpio Mars. This position provides due energy to exert more to achieve his objective. Venus is measured as most beneficial planet termed as ‘Yog Karka’.  Venus is in its own sign Libra and positioned in the ninth house. Ruler of the ninth and the tenth house Venus and Mars occupy their own respective signs. This position supports best of ‘Raj Yoga’. This leads to more abundance for Anil Kapoor, Producer. Moon rules the sixth house. Moon is in a dual nature earth sign Virgo along with shadow planet Rahu. Both are stationed in the eighth house. Malefic Ketu is in a dual nature last of water sign Pisces. Ketu is positioned in the second house.

Anil Kapoor, Indian actor and producer is currently under the influence of Jupiter sub period in major period of Saturn for whole of the year 2019 and beyond.

Ruler of the Ascendant Saturn transits in a dual nature last of fire sign Sagittarius. Now Saturn repeats its own radical position. Saturn moves through the eleventh house. Saturn moving through the eleventh house crosses over radical position of mighty Sun and its own radical position therein. This movement of Saturn is to work well for increase inflow of money for Anil Kapoor, Producer. This movement of Saturn indicates progressive and prosperous time for Anil Kapoor, Indian actor and producer. However, Anil Kapoor, Producer needs to accept new challenges willingly and work hard over the same to push ahead his prospects in general.

Shadow planet Rahu currently transits in a water sign Cancer. Rahu moves through the sixth house. Anil Kapoor, Indian actor and producer needs to handle his finance much carefully here. He also needs to be careful about his health here. From 7th March Rahu enters a dual nature air sign Gemini. Rahu is to then move through the fifth house. Here Anil Kapoor, Producer may be tempted to cut corners to push ahead his prospects. He needs to refrain from taking short cuts and accept new challenges. He needs to be prepared to exert more by working for extended hours to establish himself as good actor.

Malefic currently Ketu Transit in last of earth sign Capricorn. Ketu moves through the 12th house. This movement of Ketu can put Anil Kapoor, Producer in discomfort in matter related to personal life. He needs to handle tricky situation much tactfully and with due delicacy. From 7th March Ketu enters last of fire sign Sagittarius. Ketu then moves through the eleventh house in company of wily Saturn. This movement of two malefic renders kind of mix results for Anil Kapoor, Producer. He is to get encouraging opportunity to benefit monetarily. At the same time some constraints are to hold him from moving ahead on road to progress. Anil Kapoor, Indian actor and producer needs to keep his cool and have patience on his side. He needs to avoid any kind of controversy for good.

Jupiter currently transits in a fix nature water sign Scorpio. Jupiter now repeats its own radical position. Jupiter moves through the tenth house. Jupiter moving through the tenth house crosses over its own radical position along with radical position of Mars and crafty Mercury positioned therein. This movement of Jupiter leads to progressive forces to work effectively. In turn his movement is to increase the inflow of money for Anil Kapoor, Producer. He is to get different role to act and revive his position as a versatile actor.

From 30th March Jupiter enters its own sign Sagittarius. Soon from 11th April Jupiter becomes retrograde. From 23rd April Jupiter again enters a water sign Scorpio moving in retrograde mode. From 12th August Jupiter becomes direct in motion. This period of retrogression of Jupiter is to be eventful for Anil Kapoor, Indian actor and producer. However, Anil Kapoor, Producer has to accept new challenges willingly and work hard over the same to enhance his prospects on occupational front.

From 5th November Jupiter reenters its own sign Sagittarius. Jupiter now moves through the eleventh house in company of malefic Ketu and wily Saturn. This movement of Jupiter is to reduce intensity of obstructionist forces. Anil Kapoor, Producer is not to have any constraints to march ahead on road to progress. Progressive and prosperous time is envisaged for him.

In short, with two major planets to repeat their own respective radical position, the period is to be much eventful. This transit of major planets indicates a progressive and prosperous time for Anil Kapoor, Indian actor and producer. Anil Kapoor, Producer has to accept new challenges willingly and work hard over the same to push ahead his prospects in general. Our Career Problems Solution Astrology give you best Career Remedies for your career. 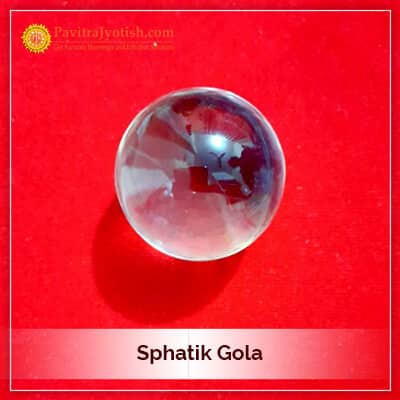 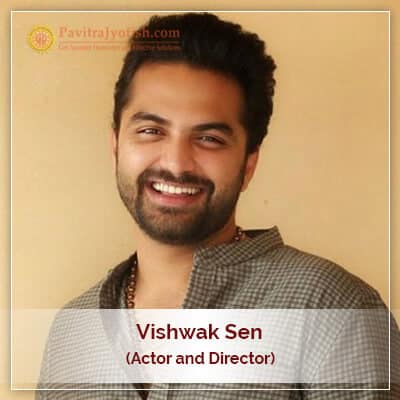