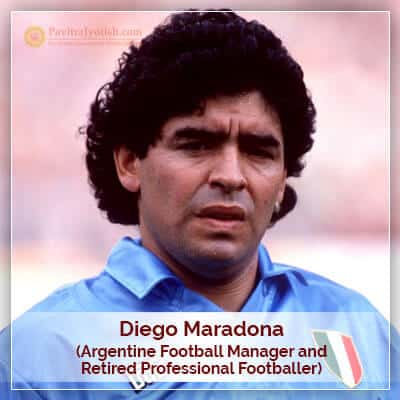 Here Is Full Detail Of Diego Maradona As Analysed Astrologically

Famous Argentine Football Manager and Retired Professional Footballer, Diego Maradona, was born on 30 October 1960, at the Policlínico (Polyclinic) Evita Hospital in Lanús, Buenos Aires Province. He is the elder brother of Diego Maradona “Chitoro” and Dalma Salvadora Franco ‘Doña Tota’. He was a player associated with Estrella Roja, a neighbourhood club where his talent was discovered by a talent scout. Later, he was made a part of Los Cebollitas (The Little Onions), the junior team of Buenos Aires’s Argentinos Juniors. As a player, he is said to have a certain kind of magical display with the ball during the halftime intermissions of first division games. At present, he is gracing Argentine Primera División club Gimnasia de La Plata as a coach. His is also reputed to be one of the best footballers of all time. He also held the position as a joint winner for FIFA Player of the 20th Century award. One of the chief qualities for which he was always a standout player on the field was his presence and leadership which was the main reason that held his team’s general performance up on the notch. His nickname, “El Pibe de Oro” (“The Golden Boy”) was given to him due to his precociousness as a player, which remained glued to him for the rest of his football career.

We are conducting an astrological analysis on the life of famous footballer from Argentine, Diego Maradona in the following horoscope chart and narratives.

Birth Details of Diego Maradona are as per given below: 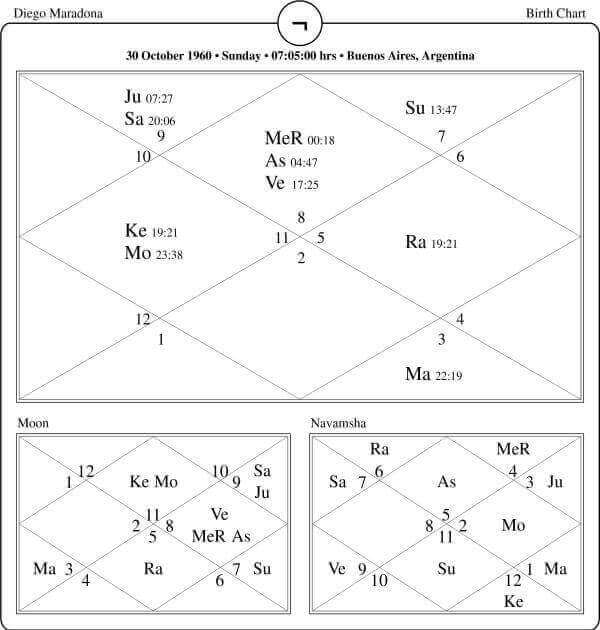 An apt way to describe Scorpio natives would be compare them to the mythical bird Phoenix – the one who had the ability to rise from the ashes! At their best, Scorpios are multi –dexterous and do not try to intrude into anyone else’ boundaries, unless provoked, It is very important to understand their needs, interests, abilities and most of all, their deep urges, They are highly determined in their intentions and powerful in taking decisions. Often they possess a rigid mindset. As already pointed, at times, they are highly sensitive and emotional and are liable to get caught in an emotional whirlpool. Possessors of very short memory, they wait for years to take revenge, especially if they had been wronged on an emotional level. To ‘forgive and forget’ is for others.

In Navmansha D9 chart, Mars being in own sign Aries gathers strength. Saturn and Moon are exalted hence gather strength.

In D10 chart ruler of the tenth house Venus is in last of fire sign Sagittarius and Mars is exalted. These positions support Diego Maradona, Retired Professional Footballer to succeed as a talented footballer.

Diego Maradona, Argentine Football Manager is currently under the influence of Moon sub period in major period of Venus till 13th June 2021. This position seems supportive for a progressive and prosperous time ahead for Diego Maradona, Retired Professional Footballer.

Viewing position of planetary energy in Scorpio Ascendant and effect of transit by major planets, we try to explore prospects of Diego Maradona in near future. Questions To Astrologer for solutions to your problems.

Wily Saturn currently transits in own sign Capricorn. Saturn moves through the third house. Saturn moving through the third house aspects radical position of debilitated Sun positioned in the 12th house. This indicates that Diego Maradona, Retired Professional Footballer has to exert more to excel in his performance to win more matches for his team. Diego Maradona, Argentine Football Manager travels many places to play and establish him as a talented footballer. This period is to be much eventful and much progressive for Diego Maradona.

From end of March 2020, Jupiter enters its sign of debilitation earth sign Capricorn. Jupiter now moves through the third house along with Saturn already moving therein. This movement of two major planets indicates something big in offing for Diego Maradona in near future. This period is to be much eventful and progressive for Diego Maradona, Retired Professional Footballer. From mid of May 2020, Jupiter turns retrograde in motion. From end of June 2020, Jupiter moving in retrograde movement again enters own sign Sagittarius. Jupiter now again starts moving through the second house. From around mid of September 2020, Jupiter becomes direct in motion. Now Jupiter becomes more effective and sends strong positive vibes. Jupiter moves through the second house in direct opposition to radical position of Mars stationed in the eighth house. Transiting Jupiter also has eye on the tenth house along with Rahu positioned therein. Viewing this movement its positive influence, time ahead seems much eventful and progressive for Diego Maradona.

Two major planets Jupiter and Saturn transiting in their own sign surely indicate something big in offing for Diego Maradona in near future. He is likely to have encouraging financial gain and succeed to prove his inherent ability to win more matches for his team. Now seems much progressive and gainful time ahead for Diego Maradona, Retired Professional Footballer.

After viewing planetary position in Scorpio Ascendant and effect of transits by major planets, time ahead seems much eventful, much progressive and prosperous for Diego Maradona, Retired Professional Footballer. Get Personalised Horoscope Predictions from our website. 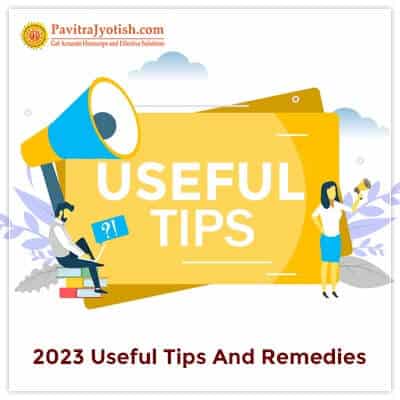 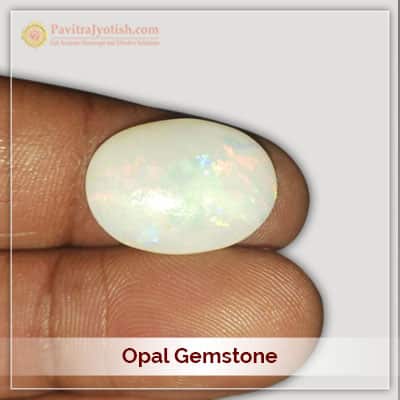 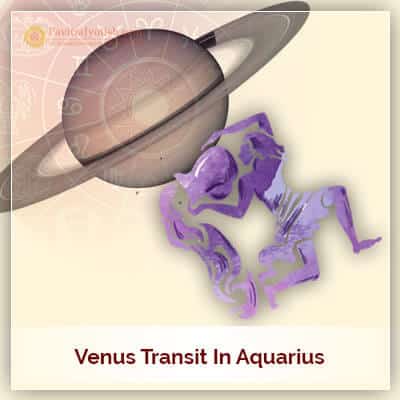