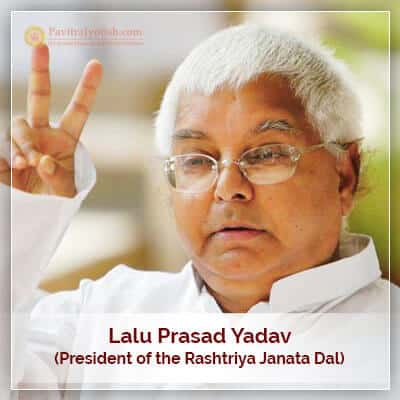 Lalu Prasad Yadav,  Indian Politician and President of Rashtriya Janta Dal is one of the most distinguished, renowned and influential political icons on Indian political landscape that itself boasts of being the world’s largest democratic country. Lalu Prasad was born in Gopalganj in Bihar to the family of Kundan Ray and Marachhiya Devi. His formal education includes Bachelor of Laws and a Master in Political Science that he accomplished from Bihar’s one of the prestigious educational institutes, Patna University. He also earned some limelight when Honorary Doctorate to be awarded to him by Patna University was turned down by Lalu. In Patna, Lalu worked as a clerk in Bihar Veterinary College along with his elder brother who worked as a peon. He did an arranged marriage with Rabri Devi, the former Chief Minister of Bihar. The couple has 9 children; two sons and seven daughters. Eldest son Tej Pratap Yadav and his younger brother Tejashwri Yadav both are active politicians in Bihar. Lalu forayed into Politics in 1970 as a general secretary of Patna University Students’ Union (PUSU) and was later re-designated as its president in 1973. Lalu Prasad Yadav participated in Bihar Movement that took place in the year 1974 which was led by Jayaprakash Narayan, an Indian independence activist, theorist, socialist and political leader. He became one of the influential leaders of Janata Party and won the Indian general election held in 1977 from Chapra Lok Sabha constituency. At that time, Prasad’s age was 29. His alliance with Janata Party did not survive longer tenure because of its infighting. Subsequently, he joined Janata Party-S and later positioned himself as the leader of lower casts and Yadav communities. He won Lok Sabha election under the Central governance of Vishwanath Pratap Singh.

Lalu became Chief Minister of Bihar in 1990 and earned praiseworthy acknowledgment from the World Bank for uplifting economic condition of the State. He came to limelight after having L. K. Advani at Samastipur arrested, when the later was orchestrating Ram RathYatra to Ayodhya. Lalu had to step down as CM of Bihar due to allegation of Fodder Scam by CBI. He formed his own political party Rashtriya Janata Dal (RJD) in 1997 when Fodder Scam allegation created a leadership revolt in Janata Dal. He served as railway minister in 2004 under UPA government. His term as railway minister was reported to be very lucrative for the Indian Railways due to some innovative schemes Lalu introduced under his leadership. His leadership resulted in a revenue turnaround of Rs 250 billion (US$5.2 billion) for the Indian Railways earning notable compliments. Also, the successful revenue turnaround catapulted reputation of Lalu, with some leading institutes in India and from around the world showing interests in his charismatic leadership. However, the report by the Comptroller and Auditor General (CAG) under leadership of Mamata Banerjee as the then railway minister of India downplayed the fiscal turnaround of the Railways as shown during Lalu’s time as the railway minister. Lalu had to serve jail terms in two scams-related charges, although he was accused in several types of scams that did a great damage to his political image.

We at PavitraJyotish are conducting an astrological analysis on the life of Lalu Prasad Yadav in the manner as discussed below.

Birth Details of Lalu Prasad Yadav are as per given below: 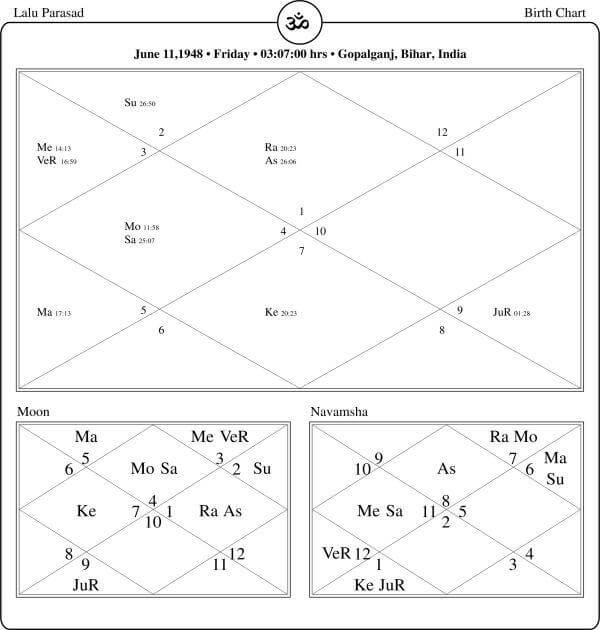 Lalu Prasad Yadav, Indian Politician is born with Aries Ascendant. Aries is first of fire sign and ruled by Mars.

In the cycle of 12 Zodiac Signs, Aries, the Ram represents the beginning. The Ram generally has the characteristics of an egocentric yet innocent newborn or a clueless yet full-of –beans newbie. No wonder, Aries, the Ram is activist par excellence. Most Aries natives are nearly addicted to promptness. Action and readiness for action form an integral part of their psychology. And, in their actions they prefer to be swift, direct and precise. No wonder, many of them are pioneers in more than one way. Many of Aries natives love to believe that they are perfectionists; and their beginnings are just that –perfect. However, during the process, they tend to overlook the norms and consequences. They may lose their perspective, and rarely are their eyes firmly set on the final goal.

In Chalit Chart retrograde Jupiter shifts into the eighth house.

Hard task master Saturn transits in a dual nature last of fire sign Sagittarius for whole of the year 2019. Saturn moves through the ninth house. This indicates a progressive time for Lalu Prasad. In spite of being in jail for corruption charges for him his party RJD won more seats in last assembly election than JDU. This shows his popularity among masses in general. Saturn moving through the ninth house crossed over radical position of retrograde position of benevolent Jupiter. Influence of Saturn moving through the ninth house has an eye over the sixth house. In view of this Lalu Prasad Yadav, Indian Politician needs to remain much careful about his health. Movement of Saturn is to render kind of mix results for Lalu Prasad. He needs to accept new challenges and work hard over the same to prove his worth in Bihar politics and also national politics.

Shadow planet Rahu enters a dual nature air sign Gemini now. Rahu then moves through the third house. Rahu moving through the third house is to cross over radical position of crafty Mercury and retrograde Venus stationed therein. This movement of Rahu is to induce Lalu Prasad Yadav, Indian Politician to take some well calculated risk to push ahead his prospects. Progressive forces seem to start working effectively for him.

Malefic Ketu enters last of fire sign Sagittarius now. Ketu then is to move through the ninth house in company of wily Saturn. This movement of two malefic can act as obstructionist force for Lalu Prasad. He needs to keep his cool and wait patiently till tide is favorably for him. He needs to exert more and accept ground realities and work accordingly.

Benevolent currently Jupiter Transit in a fix nature water sign Scorpio. Jupiter moves through the eighth house. Jupiter moving through the eighth house is in direct opposition to radical position of mighty Sun stationed in the second house. This indicates that his progeny is able to make progress on political front. Transiting Jupiter has an eye over the fourth house and influences radical position of Saturn and Moon positioned therein. The positive vibes of Jupiter seem supportive for Lalu Prasad. His health is likely to improve. However he needs to take good care of his health. He is to now become more active on political front. Lalu Prasad is then able to prove his worth in state and as well national politics. This movement of Jupiter is to support progressive forces to work effectively. He may spend money to get some religious ceremony for good.

From 30th March Jupiter enters its own sign Sagittarius. Soon from 11th April Jupiter turns retrograde. From 23rd April Jupiter moving in retrograde mode reenters water sign Scorpio. Now Jupiter moves through the eighth house. From 12th August Jupiter becomes direct in motion. This period of retrogression of Jupiter is to be much eventful. Lalu Prasad Yadav, Indian Politician is to look for new alliances to push ahead his prospects on political front. In turn he is able to prove his worth in state and national politics.

From 5th November, Jupiter again enters its own sign Sagittarius. Jupiter is to then repeat its own radical position in the ninth house. Now Jupiter moves through the ninth house in company of wily Saturn and malefic Ketu. This movement of Jupiter is to work well to reduce intensity of evil effect of obstructionist forces. Progressive forces are to work effectively now on for Lalu Prasad.  He may come out of prison now in due course of time.

In short the effect of transit by major planets seems supportive for progressive forces to work effectively. However, Lalu Prasad Yadav, Indian Politician has accept ground realities and accept new challenges willingly and work over the same with positive frame of mind and push ahead his prospects in state and national politics. 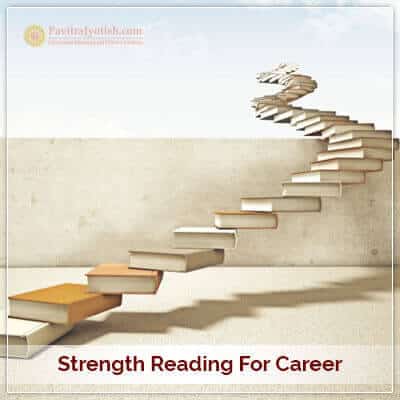 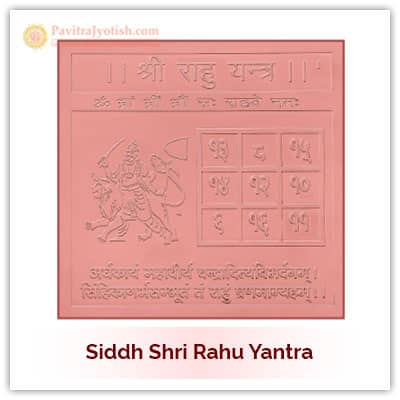