Satyanarayan Gangaram Pitroda, famously known as Sam Pitroda, is a Titlagarh-born and globally reputable entrepreneur, policymaker, inventor and telecom engineer. He is also accredited to have contributed his efforts in modernizing telecommunications system in India and laid the foundation of an autonomous telecom R&D organization known as the Center for Development of Telematics C-DOT in 1984. After renouncing his US citizenship and re-obtaining Indian citizenship, Pitroda associated himself with the Indian government, became advisor to the then Indian PM, Rajiv Gandhi and assumed the responsibility concerning modernizing global and domestic telecommunications policies of India. He was the brain behind inception of ITS (Indian Telecommunications Service) and served it as its first chairman. Pitroda is one of the policymakers accredited to have revolutionized the Indian telecommunication system, particularly public call offices (PCO) that cheapened call cost to domestic and international places for the consumers. Pitroda is the recipient of Lal Bahadur Shastri National Award for Excellence in Public Administration and Management Services in 2000 given to him in recognition of his outstanding contribution to Indian telecommunication systems. The University of Illinois at Chicago College of medicine awarded him an honorary degree in 2010. He is also the recipient of the Padma Bhushan conferred to him by the government of India in 2009 for his contribution to Science and Engineering. He also founded several companies in America, has nearly 100 worldwide patents to his credit, and been a publisher of five books and countless papers, apart from giving lectures all across the world.

We at PavitraJyotish are conducting an astrological analysis on the life of Sam Pitroda in the following horoscope chart.

Birth Details of Sam Pitroda are as per given below: 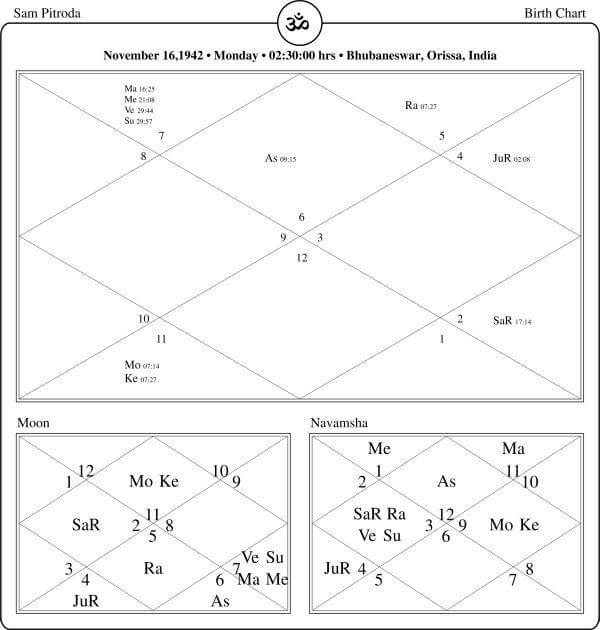 Sam Pitroda is born with Virgo Ascendant. Virgo is a dual nature earth sign and ruled by Mercury.

The sixth Sign of the Zodiac – Virgo is represented by a Virgin. Virgo is the only sign symbolized by a female in the entire Zodiac calendar. Innocent and unpolluted, a Virgin is the symbol in purity by society.  Virgo natives tend to be calculated in demanding situations, more so because of their steadying element – Earth. Left to their own devices, they would expect everything around them to be clean, organized and pure – be it people or environment. They choose to be in the company of people who are straightforward, candid and articulate. All in all Virgos are most dedicated people. They are always ready to lend a helping hand when others need it. Sam Pitroda worked for IT revolution in India.

Ruler of the Ascendant Mercury is in air sign Libra along with Mars, debilitated Sun and ruler of Libra Venus. All are positioned in the second house. This position worked well for Sam Pitroda to become highly qualified in telecom sector. Moon rules the eleventh house. Moon is in a fix nature last of air sign Aquarius and stationed in the sixth house along with malefic Ketu. Shadow planet Rahu is in a fire sign Leo and positioned in the 12th house. Saturn holds portfolio of the fifth and the sixth house. Saturn is retrograde in earth sign Taurus and stationed in the ninth house. This position of Saturn worked well for Sam Pitroda to establish himself in USA as an expert in IT field. Jupiter rules the fourth and the seventh house. Jupiter is retrograde in its sign of exaltation Cancer and positioned in the eleventh house.

In Chalit Chart Venus and debilitated Sun shift into the third house.

Sam Pitroda is currently under the influence of Venus sub period in major period of Venus for whole of the year 2019 and beyond. This influence indicates a much progressive period ahead for Sam Pitroda.

Effect of Transit by major planets during the year 2019

Hard task master Saturn transits in a dual nature last of fire sign Sagittarius for whole of the year 2019. Saturn now moves through the fourth house. Saturn moving through the fourth house has an eye over the sixth house along with Moon and Ketu stationed therein. This influence of Saturn is to see Sam Pitroda to become active in his field of activity and also on political front. However, he needs to be much careful about his health. Pain in muscles and joints can trouble him. He needs to take due care in this regard. Sam Pitroda is to experience opposition from members of ruling party. His statement can lead to some controversy. He needs to keep his cool and have patience on his side. Progressive forces are to work effectively now for Sam Pitroda. He has to accept new challenges and work hard over the same to achieve his objective.

Malefic Ketu transits in a dual nature last of fire sign Sagittarius from 7th March for whole of the year 2019 and beyond. Ketu now moves through the fourth house in company of Saturn. This movement of two malefic through the fourth house does not sound a happy proposition for Sam Pitroda. He is likely to have some constraints which hold him from making desired level of progress. He can be in discomfort over some issue related to his occupation and domestic matter as well. He needs to keep his cool and have patience on his side.

Shadow planet Rahu moves through a dual nature air sign Gemini from 7th March. Rahu then moves through the tenth house. In view of this Sam Pitroda needs to take some responsibility willingly to push ahead his prospects on occupational front. He is to remain strongly motivated to achieve his objective.

Benevolent Jupiter transits in a fix nature water sign Scorpio. Jupiter moves through the third house. Soon from 30th March Jupiter enters its own sign Sagittarius. From 11th April Jupiter becomes retrograde. From 23rd April Jupiter moving in retrograde mode again enters water sign Scorpio. From 12th August Jupiter becomes direct in motion. This period of retrogression of Jupiter seems much challenging for Sam Pitroda. He needs to keep away from any kind of controversy. He also needs to take due care while travelling. Jupiter now moves through the third house in direct opposition to radical position of retrograde Saturn stationed in the ninth house. This movement of Jupiter indicates some notable change for Sam Pitroda. However, he has to accept new challenges willingly and work hard over the same. He has to exert more to make progress on occupational front. Progressive forces are to work effectively here.

From 12th August Jupiter becomes direct in motion while transiting in water sign Scorpio. Jupiter now moving through the third house is to work well for Sam Pitroda. He is to now have more freedom to work. He is to now have opportunity recover ground lost earlier. This movement of Jupiter now seems progressive and prosperous as well for Sam Pitroda.

From 5th November Jupiter again enters its own sign Sagittarius known for being optimistic. Jupiter now moves through the fourth house, in company of wily Saturn and malefic Ketu. This movement of two major planets through the fourth house seems supportive for Sam Pitroda to move ahead on road to progress. At the same this movement of Jupiter is to lead to more expenses for Sam Pitroda. He also needs to be careful about his health. This movement of major planets is to present new challenges for him. He needs to accept new challenges willingly and work hard over the same to achieve his objective about making desired level of progress.

In short effect of transit by major planets seems supportive for Sam Pitroda to make desired level of progress and prove his worth in IT field. He needs to accept new challenges willingly and work hard over the same achieve his objective. 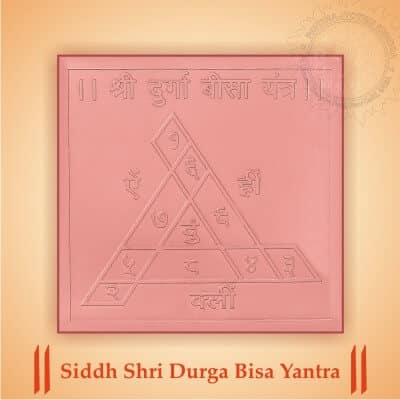 Puja for Wealth and Prosperity >>