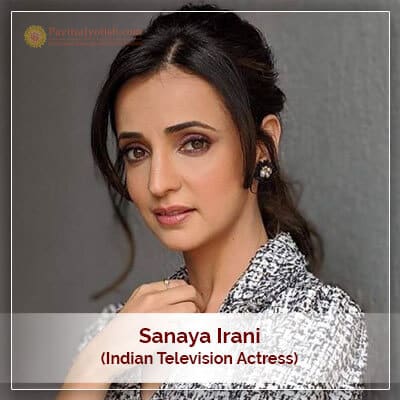 Get The Detail Of What Astrology Talks About Sanaya Irani

Sanaya Irani, Famous Indian Television and Film Actress was born on 17 September 1983 in Mumbai to a Parsi family. She is a noted television actress, who has acted in Miley Jab Hum Tum and Iss Pyaar Ko Kya Naam Doon? Graduated from Sydenham College, Sanaya did modeling before becoming an actress (cameo appearance) in a movie, Fanaa. She also acted in films, like Pihu and Ghost. She won People’s Choice Awards India (in the category of Favorite On-Screen Jodi) in 2012.

The life of famous Indian television and film actress, Sanaya Irani, is being analyzed astrologically in the following way, in which dimensional aspects of her life are being interpreted from the standpoint of Vedic Astrology.

Birth Details of Sanaya Irani are as per given below: 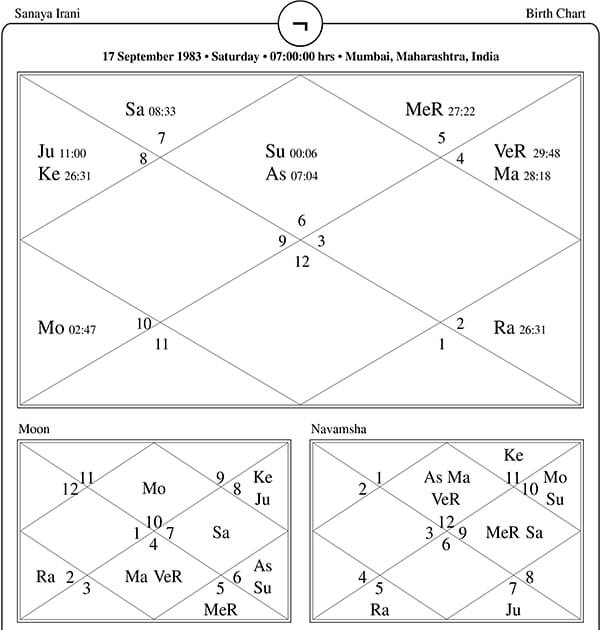 Since confirm Birth time of Sanaya Irani is unavailable we cast ‘Surya Kundli’ to foresee her prospects in near future.

Sanaya Irani, Famous Indian Television and film actress is born with king of the Zodiac in a dual nature earth sign Virgo.

The sixth Sign of the Zodiac – Virgo is represented by a Virgin. Virgo is the only Sign symbolised by a female in the entire Zodiac calendar. Left to their own devices, they would be it people or everything around them to be clean, organized and pure –be it people or environment. They prefer to pick and select their friends. They choose to be in company of people who are straightforward, candid and articulate. They detest impurities and chaos in or around them. It makes them uncomfortable and unhappy. And, since most Virgins realize their shortcoming of theirs, and work really hard to overcome it, they have natural respect for people who are good communicators. If their teachers, superiors, colleagues or bosses have to earn Virgo’s respect they have to have verbal dexterity Virgos are smart and attractive people, and possess great ambition.

In D10 chart, Jupiter stationed in the fourth house, aspects the tenth house. Ruler of the tenth house, Mars is in last of fire sign Sagittarius and along with Saturn and retrograde Venus is positioned in the sixth house. These positions lead Sanaya Irani to achieve success in multiple activities by her hard work.

On viewing position of planets in Virgo solar chart and deliberating on effect of transit by major planets, we try to foresee prospects of Sanaya Irani in near future.

Wily Saturn currently transit in own sign Capricorn in retrograde mode. Saturn moves through the fifth house. After becoming direct in motion from around last week of September, Saturn crosses natal Moon. Saturn moves in opposition to natal retrograde Venus and debilitated Mars. Saturn direct in motion opens door for Sanaya Irani to prove her ability as an actress and talented dancer. However, Sanaya Irani has to exert more to achieve success. Sanaya Irani, Indian Television Actress needs to become aware about ground reality and make moves accordingly. Period of direct motion by Saturn seems eventful and encouragingly progressive and prospective for Sanaya Irani.

Benevolent Jupiter moving in retrograde mode now enters own sign Sagittarius. Jupiter moves through the fourth house and has aspect over natal retrograde Mercury stationed in the 12th house. However, things move slowly during retrogression of Jupiter. Sanaya Irani, Indian Television Actress needs to keep her cool and have patience on her side.

From around mid of September 2020, Jupiter becomes direct in motion. Effect of positive vibes of Jupiter now becomes much more effective. This movement and positive influence of Jupiter pushes progressive forces to work much effectively. In turn Sanaya Irani gets encouraging opportunity to exhibit her inherent ability as an actress and talent as a dancer. Sanaya Irani is able to prove her versatility as an actress and dancer. In turn, Sanaya Irani has heartwarming financial gain. Gain here adds strength to her position on financial front.

Two major planets transit in own sign and move through major important house, surely indicates much eventful, encouragingly progressive and much prospective time for Sanaya Irani in near future.

On viewing planetary positions in Virgo ‘Surya Kundli’ and deliberating on effect of transits by major planets, period initially does not look much prospective for Sanaya Irani, Indian Television Actress. Things start moving favorably for Sanaya Irani from mid of September 2020 and this in turn, makes Sanaya Irani, Indian Television Actress richer and wealthier in near future.  Get Career Report 10 Year from our Career Horoscope Section.

Must Read: Astrological Analysis About Nia Sharma and About Shweta Tiwari Horoscope 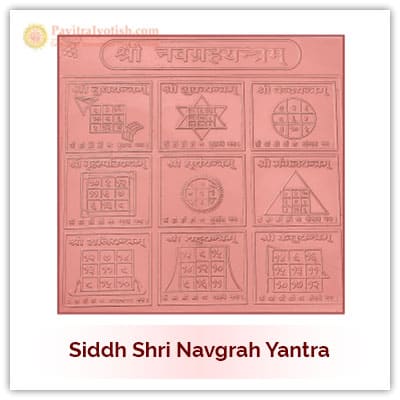 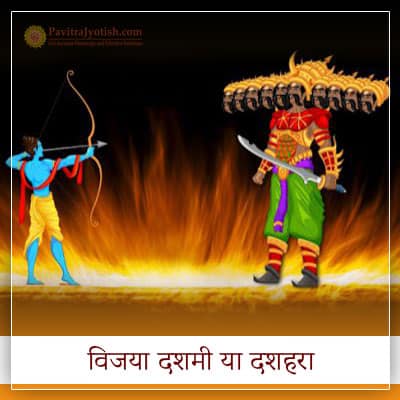