Introduction of Dharmendra Pradhan – Minister of Petroleum and Natural Gas

Dharmendra Debendra Pradhan was born on June 26, 1969. He is an Indian politician associated with BJP. His father Dr. Debendra Pradhan was also a former BJP MP. He is the Minister of Petroleum & Natural Gas and Skill Development & Entrepreneurship under the government led by Narendra Modi. From the constituency of Madhya Pradesh, he was elected to the Rajya Sabha in 2018 and was a member of the 14th Lok Sabha of India. His electoral constituency is Deogarh situated in the state of Odisha. Apart from actively associated with BJP, he is also a member of RSS. Pradhan is academically qualified and holds an M.A. (Anthropology) degree from the Utkal University Bhubaneswar. Also, a general secretary of BJP, the responsibility to his credit that he performed as a member of the party was to supervise BJP’s activities in Jharkhand in 2011. He is said to be a close confidant of Amit Shah, the BJP party president. During Lok Sabha election of 2014 held in Bihar, Pradhan contributed a keynote responsibility in shaping the victory of BJP in the state.

Team PavitraJyotish is analyzing the astrological aspect of Dharmendra Pradhan in the following horoscope chart and details thereof.

Birth Details of Dharmendra Pradhan are as per given below: 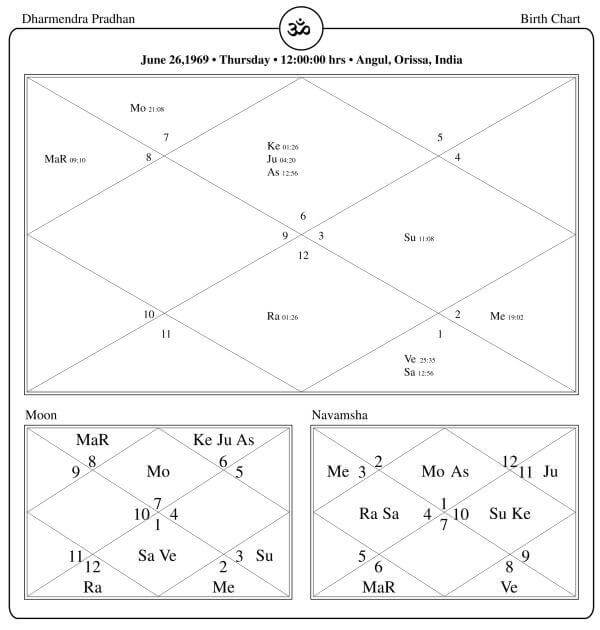 In Navmansha D9 chart Mercury is in own sign Gemini and gathers strength.

Hard task master currently transits in a dual nature last o fire sign Sagittarius. Saturn moves through the seventh house in direct opposition to his Sun sign. Saturn moving through the seventh house has an eye over the fourth house along with radical position of malefic Ketu and Jupiter stationed therein. Viewing this movement of Saturn through the seventh house does not spell a happy proposition for Dharmendra Pradhan. This movement of Saturn is to present new challenges for him. He is to become aware about ground reality. Dharmendra Pradhan needs to remain accommodative about constructive suggestion from near ones. He needs to accept new challenges willingly and work hard over the same to keep his prospects alive to win in current parliamentary election. Dharmendra Pradhan needs keep moving to gather more support to help him win in the current parliamentary elections.

Malefic Ketu entered last of fire sign Sagittarius from 7th March. Ketu moves through the seventh house in company of wily Saturn. This movement of two strong malefic through the seventh house indicate much challenging time for Dharmendra Pradhan. Influence of Saturn over radical position of Jupiter can lead to a major change for him. He needs to remain aware about ground reality and formulate a strategy to score over his rivals. Dharmendra Pradhan has to exert more to win over more support for his cause.

Shadow planet Rahu entered a dual nature air sign Gemini from 7th March which happens to be his Sun sign. Rahu moving through Gemini is to cross over radical position of Sun stationed therein. This movement of Rahu does not sound well for his prospects about winning in current parliamentary elections. Dharmendra Pradhan needs some seniors to canvass for him by gathering more support for him. He needs emphasis about good work done by NDA government. He needs to refrain from making any kind of controversial statement.

Jupiter entered own sign Sagittarius from 30th March. Soon from 11th April Jupiter became retrograde. From 23rd April Jupiter moving in retrograde mode entered a fix nature water sign Scorpio. Jupiter then moves through the sixth house. Jupiter moving through the sixth house has an eye over the tenth house. This movement of retrograde of Jupiter is to be much eventful and supportive for progressive forces to work effectively. His expenses are to increase. He needs to execute due discrimination while spending money. This movement of retrograde Jupiter and its influence over the tenth is to enhance his prospects to win in current parliamentary election. 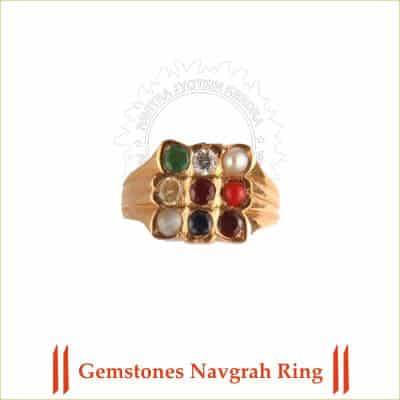