Prakash Javadekar is a famous Indian politician born on January 30, 1951. A Bharatiya Janata Party leader due to his political association with the party, he is also the incumbent Union Minister associated with the ministry of Human Resource Development under the Narendra Modi-led central government. Also elected as an MP for the upper house RajyaSabha from Maharashtra, Javadekar held an independent charge as the minister state Environment, Forests, and Climate Change, apart from the designation that he graced for Information and Broadcasting. As a veteran leader, Prakash Javadekar, Minister of Human Resource Development is officially designated as a spokesperson of the Bharatiya Janata Party. Graduated in B.Com (Hons) from the University of Pune, Javadekar laid the foundation of his political career during his Satyagraha nonviolent movement against the then government of Indira Gandhi in response to the draconian state of emergency she declared in India. Javadekar was elected to the Maharashtra Legislative Council for the tenure of 1990 and 2002, served as the Executive President of the State Planning Board, and held the portfolio as the Chairman of the Task Force on IT in the government of Maharashtra. His ministry is responsible for conducting a common admission process through the JoSAA agency for national institutes. His wife is Dr. Prachee Javadekar, a former director of the Pune-based Indira Institute of Management. The couple has two sons; Dr. Ashutosh Javadekar and Apoorva Javadekar.

Team PavitraJyotish is conducting an astrological analysis on Prakash Javadekar. Details are represented through the following Horoscope chart and descriptions that follow.

Birth Details of Prakash Javadekar are as per given below: 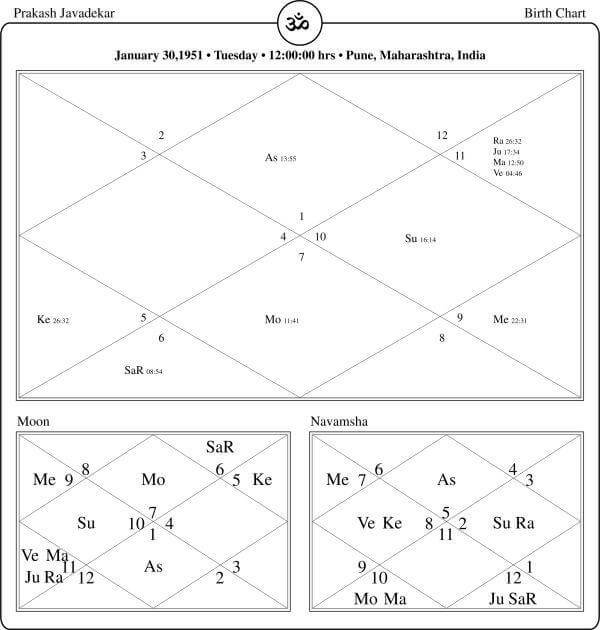 Prakash Javadekar is born with Sun in Capricorn Zodiac Sign, the tenth sign of Zodiac and ruled by Saturn. This position of Sun makes him good at planning a sound strategy. Mercury rules the sixth and the ninth house for his Sun sign. Mercury is in last of fire sign Sagittarius and positioned in the 12th house for his sign. Jupiter rules the 12th house. Jupiter is in a fix nature last of air sign Aquarius along with Mars, Venus and shadow planet Rahu. All are stationed in the second house for his Sun sign. This position makes him ambitious and keen to move ahead on road to progress. Saturn besides being ruler of Sun sign also holds the portfolio of the second house. Saturn is retrograde in a dual nature earth sign Virgo and positioned in the ninth house. Malefic Ketu is in a fire sign Leo and positioned in the eighth house. The seventh house is ruled by Moon. Moon is in air sign Libra and stationed in the tenth house. This position indicates that Prakash Javadekar remains under pressure for one reason or other.

Ruler of Sun sign Saturn currently transits in a dual nature last of fire sign Sagittarius. Saturn moves through the 12th house from his Sun sign. Saturn moving through the 12th house crosses over radical position of Mercury stationed therein. Saturn moving through the 12th house has an eye own radical position in earth sign Virgo. This indicates kind of challenging time for Prakash Javadekar. Some new challenges are to come forth for him. He needs to accept new challenges willingly and work hard over the same to achieve his objective about a win in current parliamentary elections. He has to travel a lot and develop more contacts, which can push ahead his prospects to win in current parliamentary elections. Progressive forces are to work effectively here.

Malefic Ketu entered last of fire sign Sagittarius from 7th March. Ketu moves through the 12th house in company of wily Saturn. This movement of two malefic through the 12th house does not sound a happy proposition for Prakash Javadekar. He is to remain under pressure for one reason or other. This movement of two malefic is to present new challenges and become aware of ground reality. He may need to formulate a strategy to keep his prospects alive about winning in current parliamentary elections. He needs to accept new challenges willingly and work hard over the same to achieve his objective.

Jupiter entered own sign Sagittarius from 30th March. Soon from 11th April Jupiter became retrograde in motion. From 23rd April Jupiter moving in retrograde mode entered a fix nature water sign Scorpio. Jupiter moves through the eleventh house linked with relationships in general among other things. This movement of Jupiter seems supportive for progressive forces to work effectively. Prakash Javadekar is able to develop some meaningful relationship now. These meaningful relationships are to work well to push ahead his prospects to win in current parliamentary elections. However, Prakash Javadekar needs to take due care about sensibilities of the concerned person. This movement of retrograde Jupiter seems supportive for him to win in current parliamentary position with reasonably good margin.

Don’t forget to read: About Dharmendra Pradhan Horoscope and About Piyush Goyal Horoscope